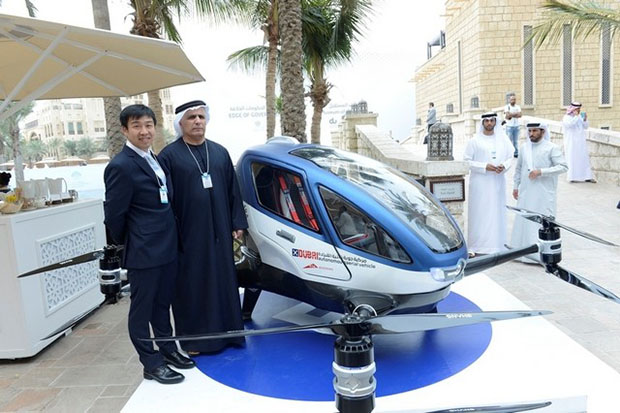 Dubai is notorious for its traffic jams and the RTA has come up with a new way to bypass these jams to make life easier for commuters. The city’s Roads and Transportation Authority recently announced that it has already tested an autonomous drone that can fly above the traffic to transport passengers to their destination. The RTA demonstrated the autonomous drone at a three day event in the city called the World Government Summit. RTA’s plan is to make such flying taxis operational by the middle of this year.

RTA has joined hands with the Chinese manufacturer of these drones, Ehang to bring the drones to Dubai.

The model that was demonstrated at the show, the Ehang 184, is capable of travelling at a speed of 62 miles an hour at a height of 984 feet, well above even the toughest traffic gridlock. It can use its electric motor to power its eight propellers for a period as long as 30 minutes. The electric motor can be recharged in just two hours. All the movements of the drone, including its takeoff, its flight and its landing can be monitored closely by ground control. The drone has been specially designed taking into account the climatic conditions and the tough terrain in the UAE.

According to  Mattar Mohammed Al Tayer, Director-General and Chairman of the Board of Executive Directors of the RTA, the autonomous aerial vehicle exhibited at the World Government Summit was not just a model but was a vehicle that has been thoroughly tested.
For those who are worried about the safety of taking to the skies in the Ehang 84, the vehicle has a number of safety features that make it possible for the drone to land at the nearest safe destination in the event of even a minor glitch. The drone also comes equipped with secure networks to fend of any attacks by hackers who might target the vehicle’s software.

The UAE is definitely a country that is at the forefront of advances in vehicle technology. The company has set the ambitious target of making at least 25 per cent of the vehicles on the road self-driving cars by 2030, has already installed many electric charging stations and is all set to be one of the cities that will introduce the Hyperloop