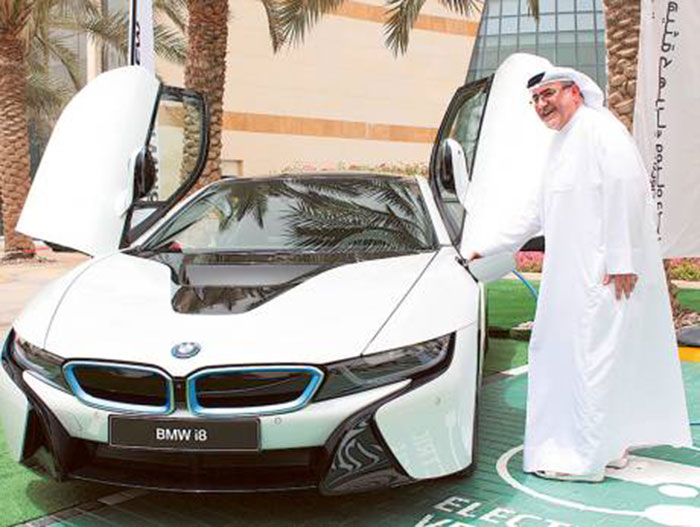 The Dubai government has announced that it plans for the civic fleet to comprise 10% electric vehicles by the end of the decade. This ambitious target will mean that government organizations will soon be placing orders for thousands of electric cars. This information is based on a statement made by Waleed Salman, executive vice-president of strategy and business development at Dubai Electricity and water Authority in an interview he made to Gulf News.

The government has been engaged in a variety of initiatives to promote the use of electric cars and 100 electric charging stations have already been set up at different places across the emirate. More are scheduled to be open to the public within a short span of time, and will considerably change the profile of vehicles that will be seen on Dubai roads.

According to Salman, the government’s target is to reduce carbon emissions by 16 per cent by 2020, with plans to reduce them even further in the subsequent years. An Executive Electric Car Committee and a Technical Electric Car Committee consisting of environmental and energy experts drawn from the RTA, Dubai Police, DEWA and the Emirates Authority for Standardization and Metrology (Esma) have been set up and charged with the task of achieving this ambitious target within the next four years.

They are currently working on finalizing a set of incentives meant to motivate more people to buy electric cars instead of petrol or diesel powered vehicles, including free parking for motorists owning electric cars.

In February this year, Ajman became the first emirate in the UAE to offer free parking to motorists who own electric or ecofriendly cars. Abu Dhabi and Sharjah are also reportedly considering this measure. According to a report in Khaleej Times, the RTA in Dubai is mulling free parking and exemption from Salik for Dubai residents who use electric cars. Other incentives that might be introduced include designated parking spots for electric vehicles.

There is considerable interest in ecofriendly cars across the Middle East, with Jordan being one the first countries in the Middle East to offer tax breaks to those who buy hybrids and Oman producing the region’s first country to develop and produce its very own electric car, the Nur Majan.