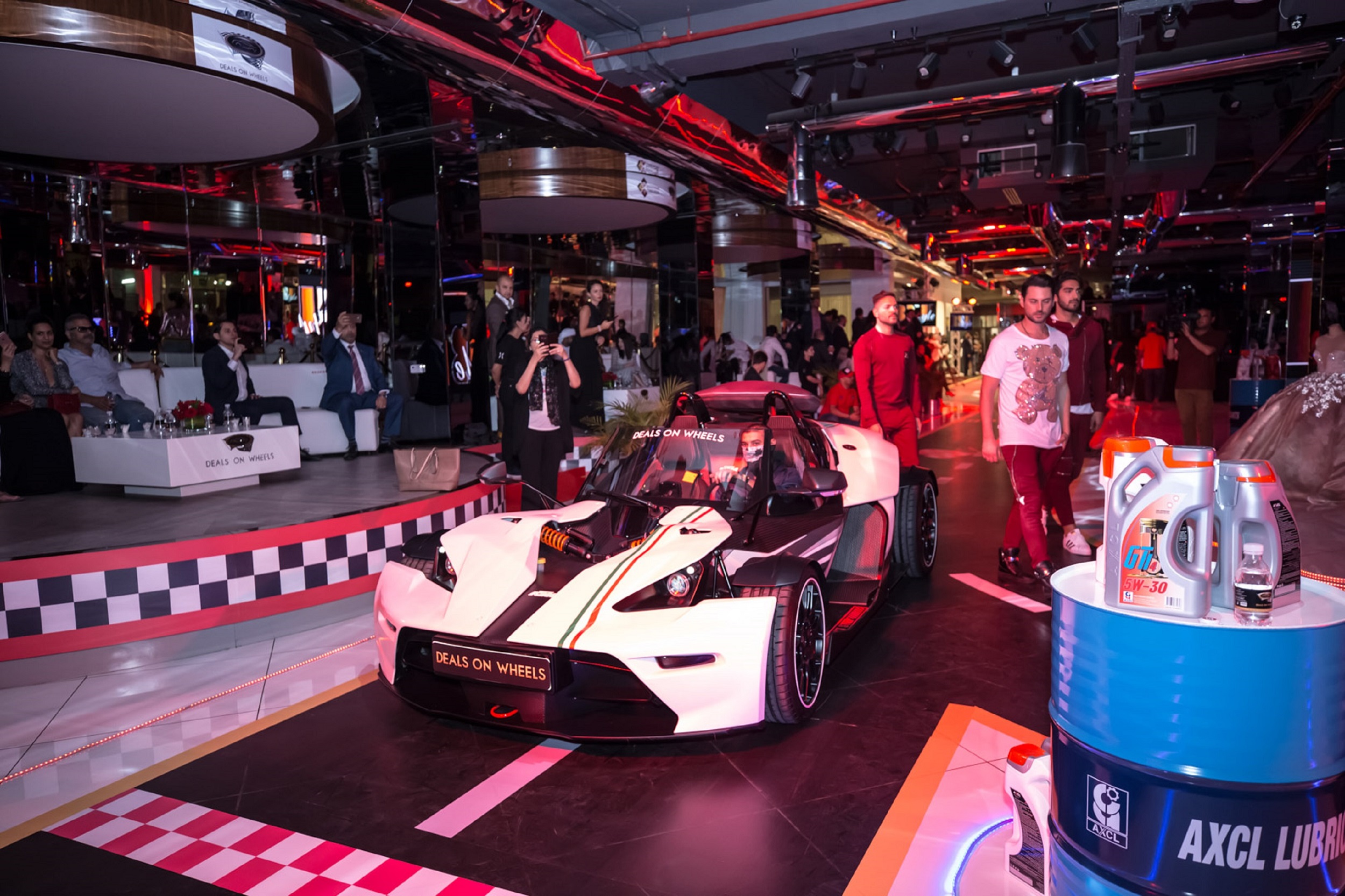 Deals on Wheels effectively blended the themes of high performance cars and luxury fashion for a high octane Formula One fashion show at their Sheikh Zayed Road showroom. The show was a fashion show with a difference, highlighting fashion, supercars, art and all the aspects of a sophisticated, lavish lifestyle. The audiences witnessed the rare spectacle of a fashion show where the cars were the stars and not the models. In keeping with the racing theme, 30 highly impressive supercars raced down a runway trimmed in red, black and white stripes came flanked by male models sporting skull masks and costumes, jewelry and accessories that matched each car on the F1 ramp. Contemporary artworks reflecting modern thoughts and inspirations adorned the across the showroom to add an element of style to the evening..

The Deals on Wheels showroom was transformed into a raceway pit lane with motoring backdrops and all kinds of racing paraphernalia. The event was attended by eminent dignitaries, members from the royal family, race enthusiasts, luxury cars aficionados, fashionistas and art lovers amongst others. The wide range of supercars displayed at the show included Bugattis, Lamborghinis, McLarens, Ferraris, Aston Martins, Porsches, and Maseratis recreated the aura of a classic Formula 1 event.

Explaining the concept and theme behind the show, Mohamed Redha Abdulla, founder of Deals on Wheels, said: “Any supercar lover is well aware of the thrill of Formula 1 racing; it’s more than just an event, it’s a culture within itself. This is what we have tried to re-create through this show: the excitement of riding super-luxury cars seamlessly paired with a unique ensemble of urban fashion – two of the top-most characteristics of the affluent lifestyle of the UAE. We are quite pleased with the outcome, and it was quite stirring to watch the classic array of supercars revving on the F1 track, building a bubbling excitement among the audience. The cherry on the top was the one-of-its-kind fashion show, which lent its unique flavor to the event”.

The exclusive collection of clothes for the men’s fashion show was designed by The Skull Society, which is known for its out-of-the-box view on urban fashion. The entire collection reflected the F1 theme, and the attire showcased at the show accurately reflected the adventurous lifestyle of supercar drivers.

Established in 2008, Deals on Wheels is among the fastest growing supercar dealerships in the world, boasting an inventory of over 200 prestigious vehicles.