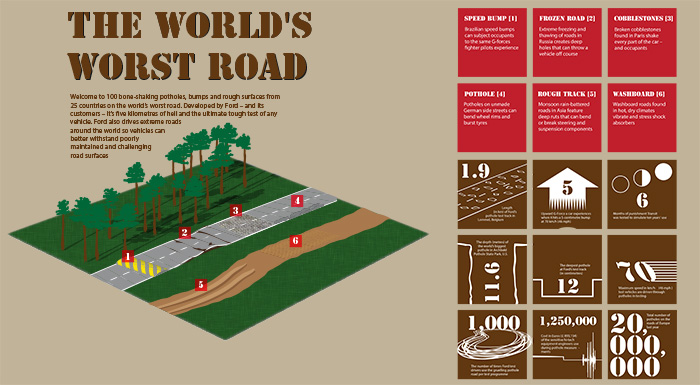 Potholes and rough roads are a major issue for motorists across the world. Even in a developed country like UK, the Royal Automobile Club received requests for assistance with regard to over 25,000 pothole-related breakdowns in 2015. This figure denotes a nearly 25 per cent increase over 2014 figures. In Europe, at least one third of all accidents every year are caused due to the poor condition and lack of maintenance of the roads.

In order to help engineers create stronger chassis systems and develop new technologies to counter even the toughest potholes, the Ford Motor Company created a dangerous 1.9-kilometre (1.2 mile) road that replicates some of the most hazardous roads and the worst potholes from countries across the world. Information about more than 100 hazards spread across 25 countries was used to create this test track. This road is part of the 80 kilometers (50 miles) of test roads at the testing facility Ford has in Lommel, Belgium. In the past three years alone, Ford engineers’ search for scary road hazards has taken them to Austria, France, Germany, Italy, Russia, Spain, Switzerland, and the U.K., as well as Asia, Australia, North America, and South America.

Eric-Jan Scharlee, durability technical specialist, at Ford’s Lommel Proving Ground, in Belgium said that the road is a rogues’ gallery of the toughest surfaces that Ford customers might encounter from a rutted traffic junction in China to a bumpy German side-street. Incorporating these real-world challenges into the company’s test facilities will help the team to develop future vehicles that can cope better with challenging conditions.

Engineers are always on the lookout for new obstacles that can be included at the facility. Using equipment similar to that used by seismologists for studying earthquakes, the engineers negotiate potholes at speeds of up to 70 km/h (46 mph), while using sensors to record the loads and strains to the suspension and components. The surfaces can range from the cobblestones of Paris to granite blocks from Belgium and speed bumps from Brazil.

Ford’s focus on making cars to tackle even the worst roads in the world led to technological innovations. One example is Continuous Control Damping with Pothole Mitigation technology that Ford is debuting in Europe on models like S-MAX, Mondeo and the Galaxy. This technology works by adjusting the suspension to mitigate the effect of a wheel dropping into a pothole, thus minimizing the damage to the suspension. Other examples are Ford’s Tire Pressure Monitoring System which alerts drivers to punctures, and the Electronic Stability Control to assist motorists with maintaining control of their vehicle when avoiding obstacles.

All the Ford models which are sold in Europe are tested at Lommel, where the team of engineers and test drivers cover more than 6 million kilometres (3.7 million miles) every year. For example, the all-new Transit was driven over the course more than 5,000 times as part of the testing regime which was designed to simulate ten years’ punishment in just six months. Other parts of the test facilities include corrosion testing in high-humidity chambers, a high-speed circuit, and salt- and mud-baths. The prototype vehicles also are driven at different locations across the world in temperature conditions ranging from -40 C to 40 C.

“Analysing data inputs during vehicle testing has enabled Ford to develop a range of advanced driver aids and design modifications to help continually improve the safety and robustness of our vehicles,” Scharlee said.