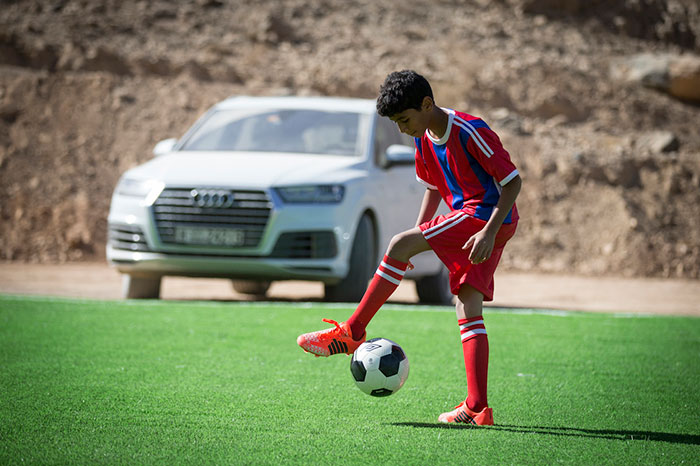 The “Audi Challenging Arabia” campaign is known for the creation of stunts like racing against the elevator in the Burj Khalifa building. As part of the campaign, Audi fans in the Middle East are asked to nominate a challenge that they would like Audi to take up using its innovative products and technical expertise. In the latest version of the campaign, a fan challenged Audi Middle East to light up a football pitch with the brand’s Matrix LED headlight technology. This was definitely a challenge Audi could not afford to ignore.

Fans submitted over 4,000 challenges Since the launch of the Audi Challenges Arabia campaign. The third successful challenge was the one from a 13 year old Omani boys who hopes to become a professional football player. He sent in a request to light up a football pitch.

Zakaria Daoud lives in a remote, mountainous village in Oman that is located 1,500 meters above sea level and lacks proper paved roads. It can be reached only via a tricky 40 kilometer long offroad route. Yet, he dares to dream of becoming a pro football player. He yearned to have a proper football pitch in his village where he could play football regularly with is friends and develop his talent.

Audi Middle East not only successfully rose to his challenge of lighting up a football pitch but also gave him a pleasant surprise by building a new football field for Zakaria and his friends to practice their favorite game. Neighboring villages will also benefit from the new pitch.