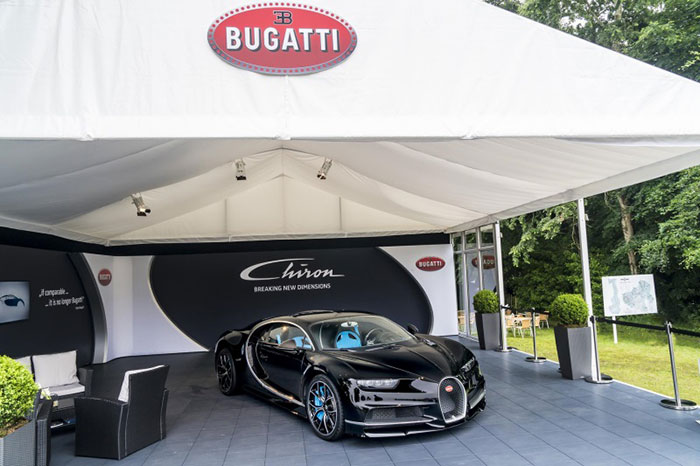 Bugatti held the UK debut of the Chiron at the Goodwood Festival of Speed. The tagline of this year’s edition of the festival “Full Throttle – The Endless Pursuit of Power” made the Festival a great choice for the launch and the model with a top speed of 420 km/h and an output of 1,500 PS was unveiled at the legendary hill climb while being driven by well known British racing driver and Le Mans winner Andy Wallace.

Commenting on the UK launch of the Chiron, Wolfgang Dürheimer, President of Bugatti Automobiles S.A.S. said that with the model being positioned as the most powerful and fastest production super sports car in the world, it represents the event’s tagline more than any other car in its class.

Andy Wallace, who has been an official Bugatti driver from 2011, deemed it a great honor to be chosen to drive the Chiron at Goodwoodwill as this proved to be the highlight of the Festival.

Bugatti is in the process of preparing for the commencement of series production of the 1,500 PS Chiron at the Bugatti headquarters in Molsheim, Alsace. The production run will be capped at 500 vehicles and over 200 customers have already placed their orders for the Chiron. The first Chiron delivery is scheduled for the autumn of 2016.

From 1993, the Goodwood Festival of Speed which is held in June every year has been one of the prime attractions for motorsports fans at the global levelof racing cars of all vintages. The hill climb is one of the main events in which the vehicles which participate drive over a 1.16 mile (1.86 km) course with nine bends over the hill at Goodwood.