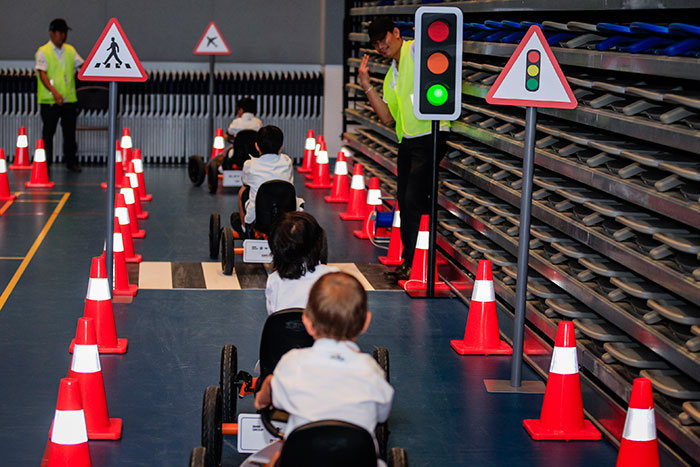 Building on the success of the campaign it held last year, in which as many as 5,000 school children in the 6 to 9 age group learnt the basics of road safety, BMW Group Middle East is joining hands with its distributors in the UAE, AGMC and Abu Dhabi Motors, and Ciel Events to educate many more schoolchildren on the importance of road safety in the UAE.

Named, My First License – I Know My Road Rules, the campaign will be held over two weeks, and will receive support from other organizations like the RTA, KHDA and Abu Dhabi Police. It will target another 3,000 students spread across nine schools in the UAE. They wilol receive comprehensive hands-on training in basic road safety rules. The program kicked off in Dubai earlier this week and will continue in schools in Sharjah and Abu Dhabi before concluding on May 26, 2016.

BMW Group Middle East and Ciel Events had previously been involved in many initiatives to promote the importance of key safety steps including buckling up. Both organizations believe that children should learn about road safety from an early age as they will be the motorists, passengers and pedestrians of tomorrow. According to Leanne Blanckenberg, Corporate Communications Manager for BMW Group in the Middle East, instilling good road safety habits and ensuring that they are aware of their responsibilities on the road in different roles right from an early age can make a major contribution towards making roads safer in the future.

She said, “We collaborated with Ciel Events for My First License™ – I Know My Road Rules™ because it does just that. It also builds upon our award-winning road safety campaign ‘Stay Alert. Stay Alive.’ which has been encouraging various stakeholders of different ages to buckle up, every time, since its launch in 2010.”

As part of the campaign, a mini road travel scenario will be created within each school, complete with zebra crossings, road signs, roundabouts and traffic stops. After a classroom session in which an instructor takes them through basic road safety rules and the nuances of the major road signs, the students will use miniature cars to navigate the roads. They will be guided in these practical sessions by members of the RTA and police, who will help them to apply what they have learned in the classroom session on a practical basis as they negotiate the roads.

Once they have successfully completed the challenge, each student is rewarded with their very own personalized plastic license card having their name and photo which is endorsed by the Abu Dhabi police, RTA and KHDA, an interactive story book on road rules and a “We Know Our Road Rules” magnet.

In view of statistics from the World Health Organisation (WHO), which prove that car accidents are the second biggest contributor to fatalities in the UAE and continue to grow every year, every little bit to enhance road safety helps. Young drivers between the ages of 22 and 30 are involved in a majority of the case, being responsible for as many as 21 deaths on UAE roads from January.

Deema Hussein, Traffic Awareness Manager for the Roads and Transport Authority welcomed the move by BMW Group Middle East and Ciel Events to extend the My First License™ – I Know My Road Rules™ campaign: The road safety crisis is a major issue that cannot be solved through the work of one organization alone. She stated that statistics proved that children need to be educated about road safety on an ongoing basis and expressed her happiness to tackle this issue in tandem with BMW Group Middle East, Ciel Events and Abu Dhabi Police.

Col. Jamal Salem Al Amri, Head of Public Relations, Abu Dhabi Police GHQ (General Head Quarters), said: “Children are extremely vulnerable and it is our duty to ensure that they have the right guidance to better their lives and their future. Programs such as My First License™’ – I Know My Road Rules™ are created to set them on the right path. Our support for this event stems from the fact that as a policy to intend to reach out to all sections of society and to be able to support more conscious efforts to build a better environment, whether it is on the roads or on any other place. It also strengthens our efforts to ensure that we have safer roads now and in the future.”