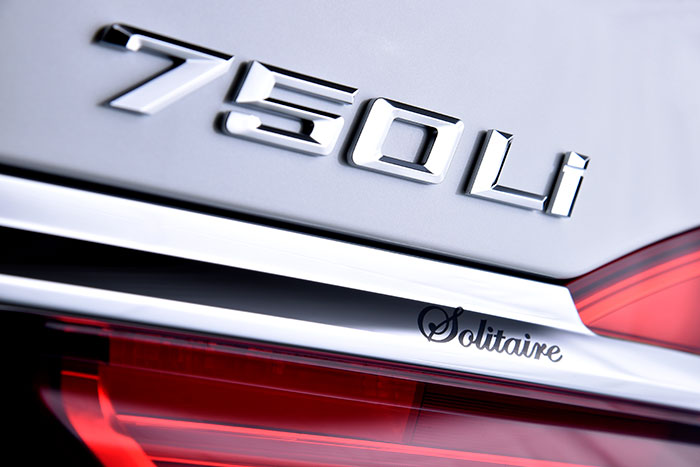 BMW Group Middle East in collaboration with its distributor in the UAE, AGMC created a sensation at the Dubai International Motor Show with the exclusive appearance of the BMW 7 Series Solitaire. At the biggest automotive event in the Middle East region which was held from November 10 to 14, visitors got a chance to see the most expensive 7 Series ever produced.

The stylish model which has a limited production run of only six cars is a component of the BMW Inpidual program. Like other super luxury cars, customers can customize their car with a bespoke design that caters to their inpidual tastes by choosing from a wide range of premium materials, paints and interior trims. The Solitaire was conceptualized exclusively for the Middle East region by the BMW Middle East office in Dubai confirming the growing importance of the region, which the third most important market for the 7 series, in terms of numbers.

The most notable features of the high end Solitaire includes an opulent look for the exterior paint with embedded glass flakes and a Rolls-Royce coach line in smoke white. The interiors are just as luxurious with leather seats and accents in BMW Inpidual Tartufo Brown with white woven piping. The floormats made of lamb‘s wool, the black piano trim in the dashboard, and Arabic inspired Pearl inlays make the interiors elegant and classy. The sparkling five carats of diamonds on the wood trim, dashboard, side panels and key provide the finishing touch and add to the exclusivity of the limited edition model.

Set up in 1991, BMW Inpidual was the first such program in the premium automotive industry and was launched to focus more on inpiduality by catering to the needs of customers looking for customised solutions.