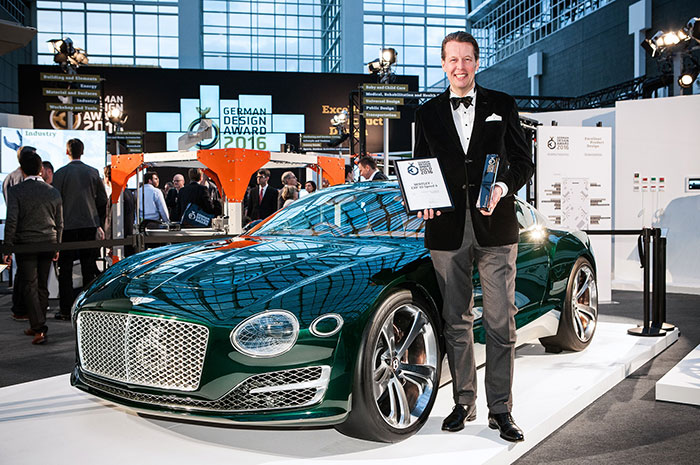 Leading luxury automotive brand, Bentley won the Gold award at the German Design Awards in Frankfurt in the Transportation category for its EXP 10 Speed 6 concept car. The car won the award on the basis of its combination of iconic design and the ingenious use of new materials. The jury for the prestigious awards consisted of a panel of globally renowned design experts.

At the award ceremony which was held in Frankfurt, Bentley’s Director of Design, Stefan Sielaff, SangYup Lee (Head of Exterior Design), Romulus Rost (Head of Interior Design and Colour and Trim) and Head of Modelling and Design Operations, Kevin Baker received the award on behalf of Bentley.

Commenting on the EXP 10 Speed 6 concept car, Johannes Barckmann, head of the panel of judges for the awards said that stylistically, he EXP 10 Speed 6 offered an impressive new take on the iconic Bentley design style, especially when it comes to the interiors. Instead of leather, high-quality wood was used to cover the door panels.

Stefan Sielaff, Bentley’s Director of Design, added: “EXP 10 Speed 6 is a thoroughly modern British interpretation of a high-performance two-seater sportscar.” He added that it used advanced hybrid technology and the finest materials to indicate the future design direction for performance and luxury vehicles. It is definitely a concept car that set new benchmarks when it comes to power, style and design.

The Bentley Flying Spur and Continental GT Speed were both thoroughly revamped in 2015 with a a suite of new interior features and external design elements. They also received special mentions from the German Design Awards judging panel.