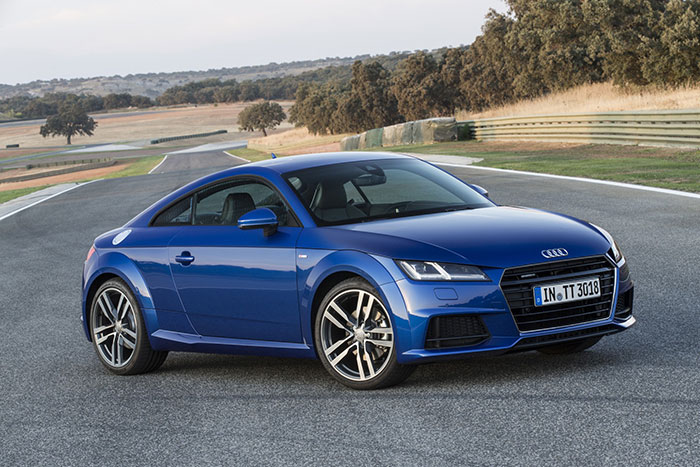 The new Audi TT won the award for the Best Premium Sports Coupe at the renowned Middle East Car of the Year (MECOTY) awards, one of the biggest automotive awards in the Middle East. Audi also made it to the shortlist for the ‘Car of the Year’ award. The MECOTY awards were given out at a glittering event held at Raffles hotel in Dubai on 29th October.

The Audi TT qualified for the award on the basis of its stylish design, its innovative features, handling, performance, safety , stylish design, quality and value. The MECOTY awards are the biggest and most desired awards in the Middle East automotive market. All the models nominated in the different segments for the MECOTY underwent a rigorous selection process from a select panel of judges.

The 12 member panel of judges for the panel was drawn from respected automotive journalists drawn from many countries across the Middle East. The selection system involves a complex yet transparent nomination and scoring methodology, which has been developed, tested and implemented by veterans of the automotive industry. Criteria on which entries were evaluated included: Design & Quality (Exterior & Interior), Emotional Appeal & Driver Satisfaction, Handling and Drivability, Value for Money (New Purchase & Resale), Safety & Durability, Comfort & Practicality, Performance & Capability, Environmental Friendly, Technological Innovation and Regional Appeal.

This is not the only award that the new Audi TT has won this year. It has already been named as the ‘Innovation of the Year’ at the Automotive Brand Contest and Sports Car of the Year by Automan Magazine and Auto Sport Magazine respectively.

Speaking about the award, Audi Brand Director Enrico Atanasio said, “To receive this award at the Middle East Car of the Year awards is indeed an honor for Audi and recognizes our leading role in the premium automotive segment.”

He added that ever since the model was launched in 1998, the Audi TT has set the benchmark for its performance and design in the premium segment. The 2015 edition marks the launch of the third generation of this stylish coupé. It is definitely a pathbreaker in terms of its engine technology, design, the chassis and its innovative operating concept.