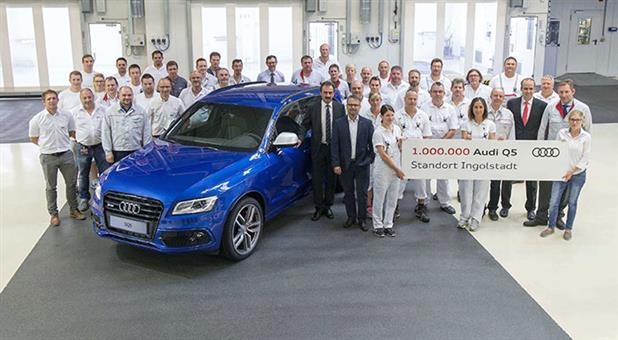 Audi celebrated a milestone when the one-millionth Audi Q5 came off the production line at the brand’s main factory in Ingolstadt. The milestone car, an SQ5 in Sepang Blue, was purchased by a German family and will be delivered to them shortly. The Audi Q5’s journey began in 2008, when the model was launched and positioned as a mid-range SUV. It was the second Audi Q-model after the Audi Q7. In the subsequent eight years, the Audi Q5 has gained a significant market share and is available in over 100 markets. On a global basis, almost 1.6 million deliveries have been made, when the variants of the Audi Q5 for the Indian and Chinese markets which are produced locally are taken into account.

According to Albert Mayer, Plant Director at the Audi site in Ingolstadt, the Audi Q5 is one model that genuinely guarantees success for the brand and he was very proud of the fact that the Ingolstadt plant has produce one million units of the SUV.

According to Peter Mosch, Chairman of the Group Works Council of AUDI AG, the milestone is the outcome of great effort and commitment from the team at the plant. He went on to thank all his colleagues who put the vehicle on the roads on behalf of the Works Council, as their skills played a crucial role in making the SUV an absolute bestseller.

Last year, the company made 266,968 deliveries of the Audi Q5, an increase of eight percent over the 2014 figure (247,446). The Audi Q5 continues to be highly successful, with sales increasing by 4.7 percent in the first half of this year, when compared to the corresponding period for the last year.

The Audi Q5 continues to be the bestselling premium SUV in its segment, with over 650 units coming off the Ingolstadt production line on a daily basis. The Audi also makes the Q% at its plants in Changchun, China, and Aurangabad, India for sale in the local markets.

From the time production started in 2008, nearly 1.6 million Audi Q5s have been sold worldwide. The markets in which the SUV is highly popular are the Middle East, China, the United States and Germany.

Audi has also set up a new plant in San Jose Chiapa, Mexico and that plant will produce its first Audi Q5 for the world market in late September.