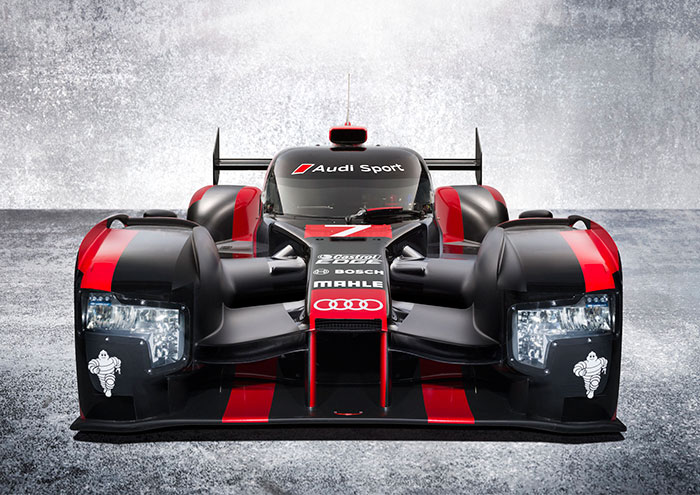 The Audi R18 steps up as the crown prince in a long line of cars that have ruled the world of endurance racing for the one and a half decades since the German manufacturer entered the sport. The redesigned R18 is easily one of the most power-packed racers that may also be the most energy-efficient Le Mans car ever designed. Audi’s success at Le Mans is legendary; since the first R8 hit the track in 2000, the company has lost only two races in the 21st century, making it one of the most successful racing franchises in history. The Audi Sport Finale at the Audi Training Center in Munich was the venue for the launch of the new R18. The R18 LMS is also ready to take on the rigors of GT racing in 2016.

The new Audi represents years of design that the company has invested into the car for the 2016 season. The defending champion of Le Mans racers, the Audi R18 Le Mans prototype—LMP1—features new aerodynamics, a brand new ultra-efficient TDI engine, and cutting edge Li-Ion batteries for power storage. These and other innovative new features will power the car for the upcoming Le Mans 24 Hours and FIA World Endurance Championship (WEC). In a statement to the press, Dr. Wolfgang Ullrich, Head of Audi Motorsport for over 22 years and 13-time Le Mans 24 Hours winner, has confirmed that Audi’s success at the Le Mans 24 Hours—the toughest endurance race in the world—hinges on the company’s reliance on Audi R18’s TDI engine technology.

The 2016 FIA WEC is slated to begin on the 17th of April at the Silverstone circuit in Britain, where Audi-sponsored Joest Racing will race in two of the new R18s. In a landmark agreement, Porsche and Audi will compete with two cars instead of three in order to maximize efficiency and optimize running costs. The four rings drivers continue to taste success in touring cars, winning 55 percent of the races in the Deutsche Tourenwagen Masters (DTM) series. Two of Audi’s drivers in the series, Frenchman Adrien Tambay and Swiss Nico Müller will be swapping teams, adding an interesting dimension to the upcoming series that is expected to be fiercely competitive. The company’s other teams—Phoenix, Abt Sportsline, and Rosberg are also expected to field Audi RS 5 DTM cars.

The 2016 GT racing season is expected to be a watershed with demand for Audi cars growing enough to warrant a significant increase in the number of cars produced. Although 45 cars were slated for production, this demand should see Audi ramp up output to meet the demands of the world’s toughest teams. The Audi R8 LMS is expected to travel well, as it has in previous seasons. The 2016 season will see the car competing through international Audi-supplied teams on four continents, with the newest version of the R8 LMS making its debut in Asia. The FIA GT World Cup in Macau, the 24-hour events at the Circuit de Spa-Francorchamps, Belgium and at Nürburgring, Germany, as well as the Bathurst 12 Hour, are the other marquee events to feature Audi cars.

In its inaugural year, the 2015 Audi Sport TT Cup season was one of the most watched DTM events and the 2016 event promises more excitement with the number of entrants being increased from 18 to 20. Dr. Ullrich stated that Audi was pleased with the company’s significant presence at motorsport events around the world, noting the high demand for the new Audi R8 LMS. He also emphasized that expectations for the Audi R18’s performance at Le Mans and WEC were high.