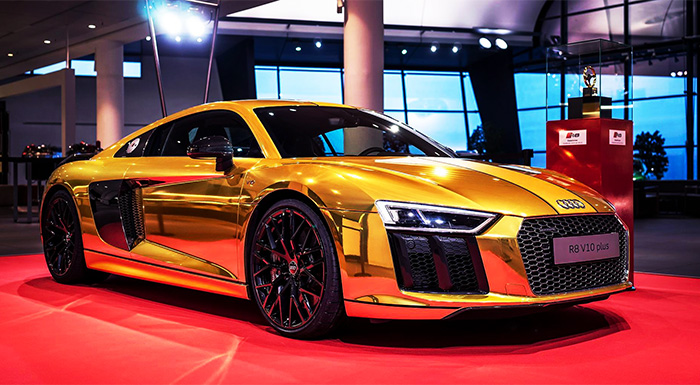 Audi celebrated the Golden Steering Wheel award it received from Auto Bild by wrapping an R8V10 Plus in gold and chrome. It was one of the winners of the Goldenes Lenkrad award this year in the sports car category. The Golden Steering Wheel awards are organized by the German automotive magazine Auto Bild in collaboration with the weekly newspaper Bild am Sonntag, and the program is held in association with group publications in as many as 20 countries across the worls. More than 425,000 readers across Europe took part in the voting to pick the winners.

The golden R8 is currently on display at the Audi Forum in Neckarsulm, Germany. The most notable feature of the golden model is that it has a tone-on-tone satin gold stripe up the center, that is flanked on both sides by black pinstripes for extra contrast. In order to enhance the contrast aspect, the accents like the wheels grilles, mirrors, rear wing and air scoops have not been chromed but have been retained in black with a glossy finish.

In addition to the Audi Forum at Neckarsulm, the German brand has displayed its collection of notable models at its headquarters in Ingolstadt. The Audi facility in Neckarsulm facility not only houses the company’s collection but also includes a restaurant, a customization studio, restaurant, a 4,000-square-foot shop, and a space for concerts for a complete day out. As it is close to Audi’s assembly plant, customers also have the option of picking up their Audi directly from the factory at Neckarsulm, which also happens to be the place where the R8 is built.

The first R8 made its debut in 2006, and the second-generation of the model premiered at the 2015 Geneva Motor Show. In this model, Audi opted for the 5.2-liter V10 engine rather than the V8 that was used in the previous model to come up with a model that has 600 plus horsepower which is conveyed to all four wheels through a seven-speed dual-clutch transmission.