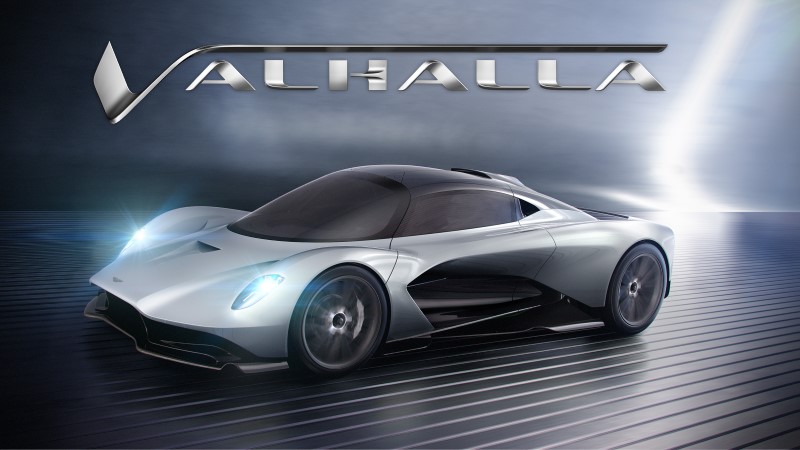 Aston Martin has revealed the official name of the new model that was earlier known by its code name, AM-RB 003. The latest mid-engined hypercar that the company would be making in collaboration with Red Bull Advanced Technologies and Adrian Newey will be called the Aston Martin Valhalla. This is the second such name that Aston Martin will be taking from Norse mythology, with the first being Valkyrie, continuing a naming tradition that began 70 years ago.

Valhalla is named after the paradise for warriors that is celebrated in ancient Norse mythology and the Valhalla will follow Valkyrie in Aston Martin quest to achieve the highest echelons of road car performance. Just like the Valkyrie, the Valhalla will leverage lightweight construction methods and radical aerodynamics for maximum efficiency. It will be powered by a high-efficiency, high-output turbocharged V6 petrol engine that will work in tandem with a battery-electric hybrid system. Only 500 Coupe examples of the all-carbon fiber Valhalla will be built.

The Valhalla will continuing the tradition of Aston Martin ‘V’ cars, with the first such models dating back to 1951, when the Vantage designation was given to high performance variants of the DB2. The actual Vantage badging was never applied, but the name stuck.

The Vantage name was first used for the DB5. Still the name was only used for the most powerful until 2005, when the Vantage became a model line in its own right. After 14 years, the Vantage range of V8 and V12-powered models is still remembered as the most successful in Aston Martin’s history. Since then the all-new generation of turbocharged Vantage cars are known for being the most dynamically focussed series production Aston Martins ever.

Along with the recently announced Vanquish Vision Concept, Valhalla will carry on this proud, seven decade old ‘V’ car naming strategy, with Valhalla indeed being a powerful enough name one of the most compelling ultra-high performance cars in the world.

Aston Martin Lagonda President and Group Chief Executive Officer, Andy Palmer said that the model names for Aston Martin always attract a lot of attention as they invariably convey a deepfelt emotion or tell a story.

Aston Martin knew that it had to use a name that would make a strong statement of its own, and yet also offer continuity and a clear connection with the Valkyrie. With Norse mythology offering a treasure trove of powerful language and rich storytelling, it seemed only right that the AM-RB 003 should also follow the Valkyrie’s theme. Valhalla stands for glory and happiness, and those who own one can be considered to be truly lucky.