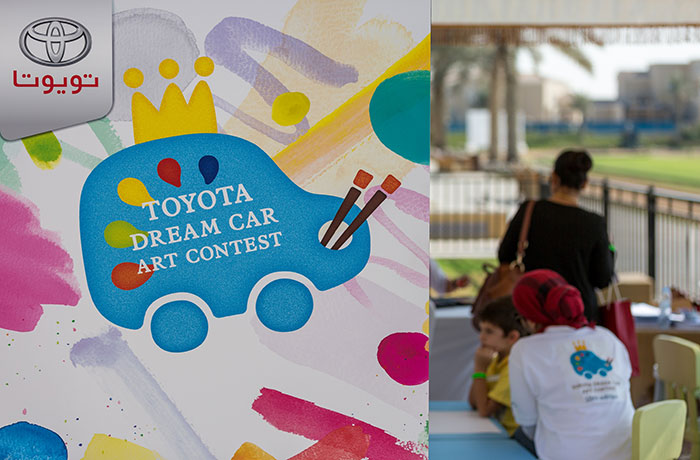 Al-Futtaim Motors, which is the sole distributor for Toyota vehicles in the UAE has announced that the company will be shortly holding Toyota’s Dream Car Art Contest in the UAE for the second year. The contest will be held at different Al-Futtaim showrooms across the UAE including the showrooms in Sharjah 1, Abu Dhabi and Dubai Festival City from December 2nd, 2015, until February 21st, 2016. The showrooms will have special corners for participants to draw and submit their entries with the support of a team of art tutors to guide and help the children develop and fine tune their ideas. The Toyota Dream Car Art Contest is meant to develop the creative talents of young people all over the world and inspire them to think about making the world a better place.

Children from 5 to 15 years of age are eligible to participate in the contest across three categories, with Gold, Silver and Bronze awards being granted across all three groups. The age limits for contestants in the three categories are 5-7 years, 8-11 years and 12-15 years respectively.

The Toyota Dream Car Art Contest is one of the initiatives that are conducted as part of the company’s social responsibility campaign and will spur children in this age group to develop an interest in cars and to think about having a dream. As part of the Toyota Dream Car Art Contest, children are asked to depict their ideas about the future of mobility by drawing their dream cars, giving free rein to their creativity, thoughts and dreams about the world at large.

The artwork of nine finalists comprising the top three entries in each age category will be submitted to the global competition in Japan. Gold, silver, and bronze award winners in the UAE will receive prizes and an award certificate and prizes and in the event that their entries are shortlisted, they will also get a chance to be invited to the award ceremony which will be held in Japan later during the year. The prizes include a professional painting set for the top nine local finalists and endowments for further studies in art for the top three local finalists from Al-Futtaim Motors.

Those who are invited to the award ceremony in Japan will be taken on a tour of the Toyota factory and will have a chance to experience the different aspects of Japanese culture.

Commenting on the Toyota Dream Car contest, Saud Abbasi, Managing Director, Al-Futtaim Motors said, “Last year’s edition of the Toyota Dream Car Art Contest saw an impressive showing of more than 12 schools and over 1,000 children participating on a local level, a fantastic feat in itself for a first edition in the UAE.” said.

He added that it was a real achievement for the UAE to have its very own Minhal Sami win the first Toyota ‘Engineering Inspiration Award’, in recognition of coming up with an entry that was highly inspiring for Toyota’s automobile production staff. He expressed his hope that her achievement will encourage more young artists to enter the contest this year.