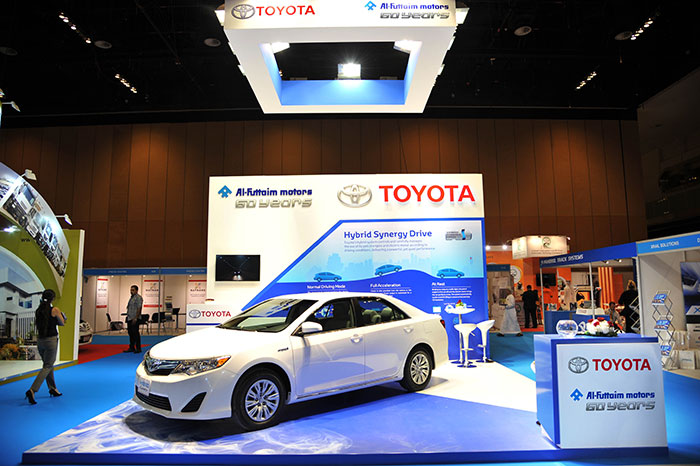 Al-Futtaim Motors, which is the sole distributor for Toyota vehicles in the UAE, was the official sponsor of the first edition of the NATRANS Arabia conference and exhibition, which was held recently under the patronage of H.E. Dr. Abdullah Belhaif Al Nuaimi, Minister of Public Works and Chairman of the Federal Transport Authority – Land and Marine. Al-Futtaim supported this event as part of its drive to heighten awareness about hybrid transport solutions across the country.

The NATRANS event is the only only transportation event in the entire GCC that focused on integrated, coordinated, multimode transportation and showcased the designs for over USD 200 billion worth of transportation projects. It was held in partnership with the UAE Federal Transport Authority.

Commenting on the company’s support for the show, Saud Abbasi, Managing Director of Al-Futtaim Motors said that Al-Futtaim Motors is highly committed to supporting the UAE’s sustainability initiatives, in line with the UAE Vision 2021’s objective of reducing pollution arising from transport. He added that the company has worked closely with the Roads and Transport Authority, and multiple taxi services across the UAE, to make the Toyota Camry Hybrid a part of their fleet, thus giving eco-conscious passengers the option of using more sustainable transport solutions, and contributing to the reduction of carbon dioxide emissions in the country.

Toyota is a global and regional leader in hybrid mobility and in addition to Toyota, Al-Futtaim Motors has been working closely with the UAE government to heighten awareness and transform attitudes across all sectors and businesses in the UAE, thus encouraging more users to switch to environment friendly vehicles.

Visitors to the NATRANS show were able to see and explore the features of a Toyota Camry Hybrid first-hand and learn more about the technology which has become highly popular across the world.

“This year alone, we have delivered more than 100 Camry Hybrid vehicles to major taxi operators in the UAE, reaching in excess of 300 environmentally-friendly vehicles available to commuters in the UAE. A study done by a local taxi operator found that a fleet of 29 Toyota Hybrid Camry resulted in a substantial 31% reduction in fuel savings per car over a period of 13 months, saving approximately 47g per kilometer in CO2 emission in the process,” explained Abbasi.

Globally, cumulative Toyota hybrid vehicles sales have surpassed 8 million, resulting in approximately 58 million fewer tons of CO2 emissions—believed to be a cause of global warming—than would have been emitted by gasoline-powered vehicles of similar size and driving performance. Toyota also estimates that its hybrid vehicles have saved approximately 22 million kiloliters of petrol, enough to fill 8,800 Olympic swimming pools, compared to the amount used by gasoline-powered vehicles of similar sizes.