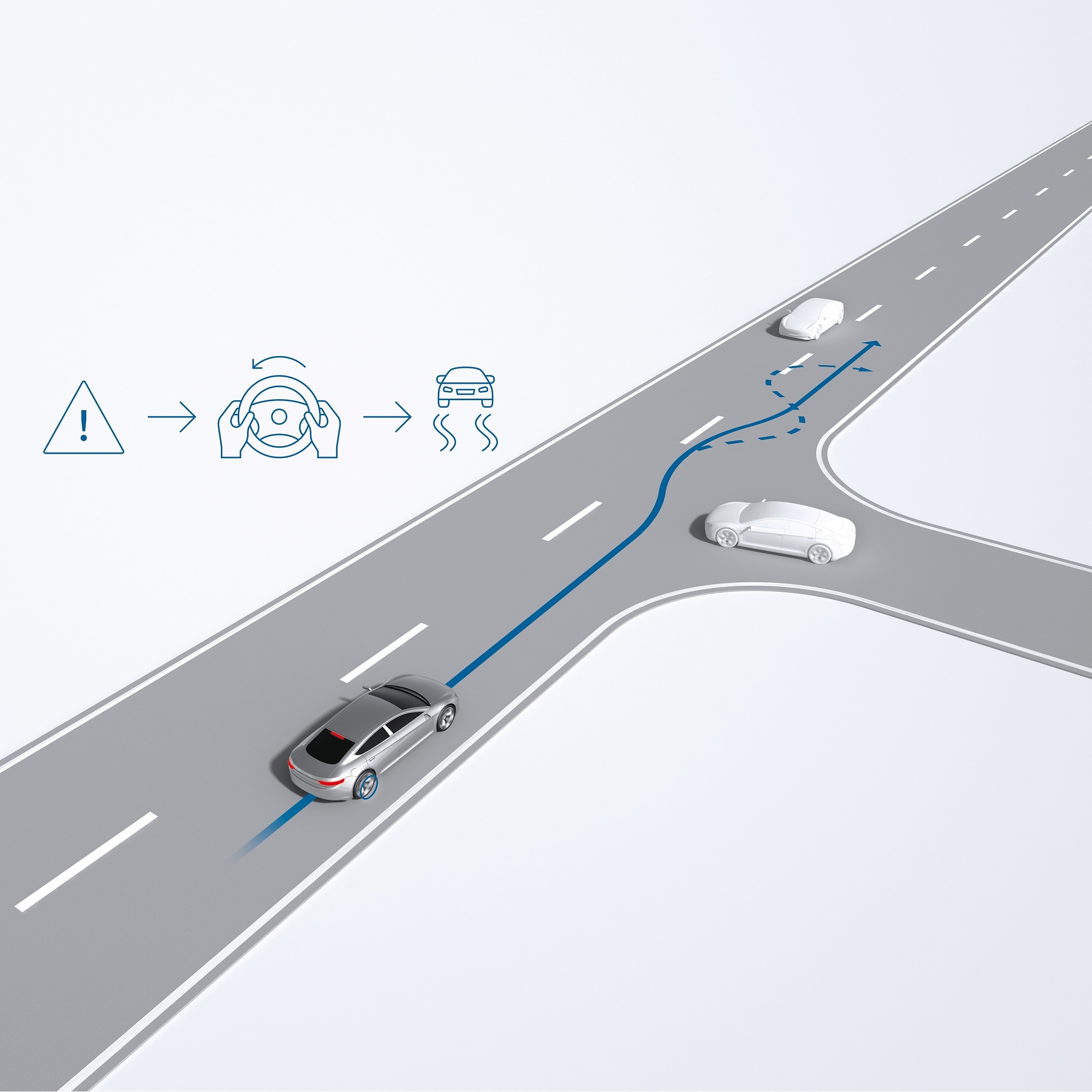 A wet road and a sudden evasive maneuver: there was a time when such a situation would frequently have ended in a ditch or against a crash barrier, and not rarely with fatalities or severe injuries. Almost 25 years ago to the day, a remedy was finally provided in the shape of a pioneering invention – the ESP® electronic stability program that Bosch and Daimler-Benz first launched in S-class vehicles in 1995. Since then, ESP® has been keeping vehicles safely on track, also in critical situations. Bosch accident researchers estimate that in the EU alone, the anti-skid system has saved some 15,000 lives over the past 25 years, as well as preventing just under half a million accidents involving personal injury. Together with the seatbelt and airbag, ESP® is one of the most important life-savers in a vehicle. “The development of the electronic stability program was a milestone on the path to our ‘vision zero’ of no more road deaths,” says the Bosch board of management member Harald Kroeger. “ESP® is an outstanding example of what we mean by ‘Invented for life.” The innovation may be from 1995, but there is nothing dated about it: Bosch has continuously improved its anti-skid system and produced more than 250 million ESP® systems to date. Modern cars are inconceivable without this electronic guardian angel. Worldwide, 82 percent of all new vehicles are equipped with ESP®. In 2017, this figure was 64 percent.

ESP can prevent up to 80 percent of all skidding accidents

Especially when roads are wet or icy, when evading unexpected obstacles such as animals on the road, and also when driving into a bend too fast, the electronic stability program intervenes. With ESP® on board, up to 80 percent of all skidding accidents can be prevented. It combines the functions of the ABS antilock braking system and the TCS traction control system but can do considerably more. It also detects vehicle skidding movements, and actively counteracts them.

The anti-skid system uses information about vehicle dynamics to detect whether the car is heading in the direction the driver is steering. If there is a discrepancy between these two factors, ESP® intervenes. This may sound simple but is in fact a complex process. Smart sensors help compare steering angle and vehicle trajectory 25 times a second. If the two diverge, ESP® reduces engine torque and brakes individual wheels. In this way, the system helps the driver prevent the vehicle from breaking away or skidding – effectively nipping many accidents in the bud.

The story behind this achievement is a long one. It started in the 1980s with initially independent efforts by Bosch and Daimler-Benz to achieve more vehicle stability. From 1992 until market launch, experts from the two companies worked together in a project unit. The legendary elk test of 1997 helped the system achieve a breakthrough: during tests for a Swedish automotive magazine, a Mercedes Benz A-class tipped over when making an abrupt evasive maneuver. Mercedes-Benz responded by making ESP® standard equipment. Since that time, more and more vehicles of many different automakers have adopted the anti-skid system.

Fewer accidents, fewer injuries, fewer fatalities – legislators have also recognized the benefits of ESP® and made it a mandatory feature of vehicles in many parts of the world. In the EU, the mandating process was gradual. From November 2011, it was initially mandatory for new passenger-car and commercial-vehicle types, and from November 1, 2014, for all newly registered passenger cars and commercial vehicles. And also, in Argentina, Australia, Brazil, Canada, China, Ecuador, Israel, Japan, Malaysia, New Zealand, Russia, South Korea, Turkey, and the United States, the anti-skid system is either legally mandated or a self-imposed commitment. Experience from Europe shows that if the proportion of vehicles featuring the system rises, accident numbers fall.

“ESP® has taken road safety to a new level,” Kroeger says. And it has done so across a diverse range of vehicle types. Bosch offers customized ESP® systems for all powertrain types, from combustion engines to electric motors, and for vehicles of all kinds, from micro cars to commercial vehicles. Even for motorized two-wheelers, the company has developed a kind of ESP®. The MSC motorcycle stability control that Bosch launched in 2013 ensures the best possible stability in all riding situations and is a further pioneering road-safety achievement.

At the same time, ESP® is the basic technology for many driver assistance systems, as well as for the automated driving with which Bosch is pursuing its vision zero. “Whether new or tried and tested, Bosch technologies alert and support drivers in critical situations. And increasingly, they are in a position to assume monotonous and fatiguing tasks. This gives us an opportunity to further reduce the number of accidents and road deaths,” Kroeger says. Whether with or without a driver at the wheel, Bosch will be nipping accidents in the bud in the future as well.