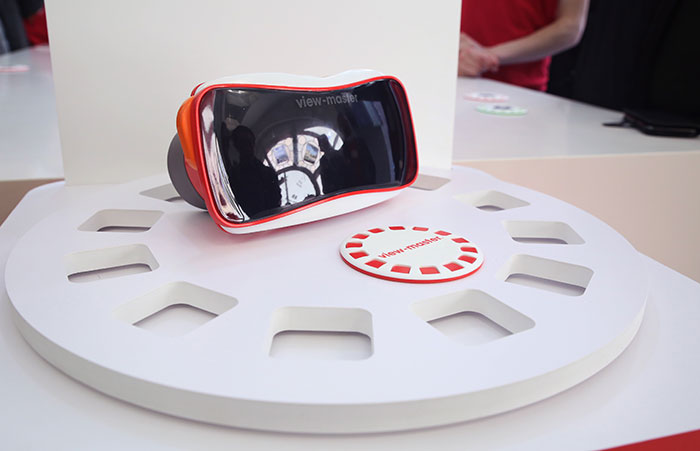 Igniting the imagination goes beyond complex electronics and expensive devices. View-Master rekindles the simple pleasures of being immersed in engaging content, rejuvenating the idea of the classic negative film viewer and bringing it to your smartphone. The View-Master extends its capabilities beyond that of a standard VR device by including customized 360-degree content delivered through a starter card pack that activates the content on your smartphone.

A product of toymakers Mattel Inc., the View-Master starter pack includes a child-friendly VR viewer that is compatible with almost all types of android devices and the iPhone as well as a preview pack that includes content produced in conjunction with National Geographic and NASA. Additional content packs include full 360-degree tours of great wonders such as the Mayan city of Chichen Itza or London Tower Bridge in addition to virtual reality explorations of the solar system including mini-games to complete the infotainment experience as well as virtual tours of wildlife in the African Savannah grasslands, the deep Amazon jungles, and the wild outback of Australia. The NASA star map allows you to experience the simulation of a night sky relative to your geographic position.

The View-Master’s augmented reality simulation is designed to be a step below full-video VR devices and the device’s affordable price represents Mattel’s deliberate strategy in introducing virtual reality to a younger audience. The View-Master app is fairly large, taking up between 215 and 300 MB on a smartphone. The headset is compatible with Google Cardboard apps as well as 360-degree video on YouTube.