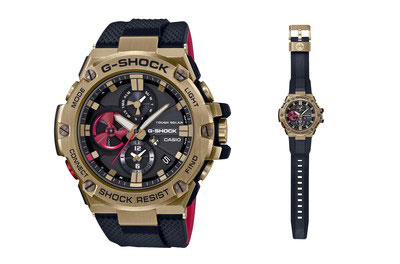 Casio Computer Co., Ltd. announced today the release of the GST-B100RH, a new addition to the G-SHOCK line of shock-resistant watches. The GST-B100RH is the first collaboration model created with professional basketball player Rui Hachimura.

Hachimura, who has had a successful first professional season in the professional basketball league in the US, resonates with G-SHOCK, a brand that, like him, comes from Japan and never fails to take on new challenges on the global stage. Hachimura had this to say regarding his signature watch, “Casio has come up with an amazing watch that perfectly captures the design I envisioned. I think it goes well with various clothing styles. It was also cool to see my special “Black Samurai logo” design on the watch, as it is an important symbol to me.” Casio and Hachimura signed a global partnership agreement in November 2019. Hachimura, who has loved G-SHOCK watches since he was a student, becomes the first basketball player to ever receive a signature collaboration with Casio.

The new GST-B100RH is a signature model whose design was overseen by Hachimura. The watch is based on the analog chronograph GST-B100, part of the G-STEEL series that features a bezel made from a combination of different materials and a large dial indicator. This cool watch features a black base color highlighted by edgy gold ion planting (IP) applied to the metal parts. The watch incorporates a hachi (8 in Japanese) logo representing both his last name and jersey number. Additional bold red accents are applied to the index mark and button pipe at the 8 o’clock position, and to the dial indicator. This signature model is distinguished by the Hachimura logo, also widely known as the “Black Samurai logo,” on the case back, strap keeper, and special packaging.