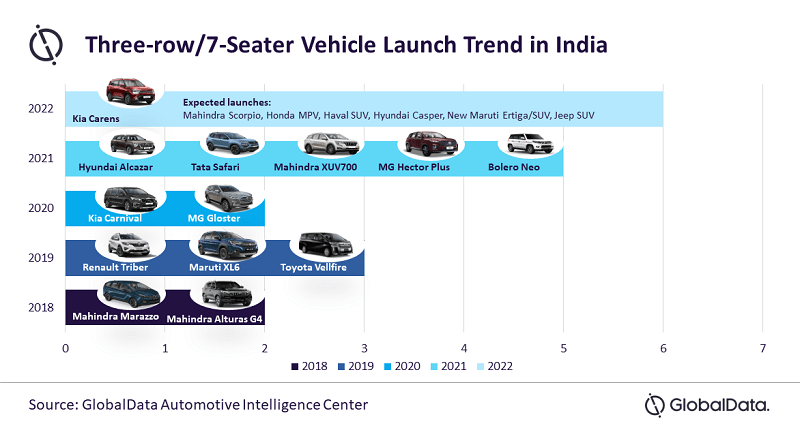 Despite the COVID-19 impact, new vehicle launches in India have been able to charge up the local market. In line with this, Kia Motors India recently launched its new 7-seater three-row MPV in India called ‘Kia Carens’. This launch marks the entry of Kia Motors in the mass market MPV segment after the premium MPV Carnival. It indicates the trend that the market for three-row 7-seater SUV/MPVs in India is likely to heat up in 2022 with the launch boosting Kia’s competitive position in the Indian market, says GlobalData, a leading data and analytics company.

The progress in new vehicle launches is supplemented by the growing demand for personal mobility and high consumer traction towards feature flooded vehicles.

The Carens is a five-or seven-seat 4,540mm long MPV based on the HMG KP platform. The Seltos-based model is initially only for the Indian market, manufactured locally at the Anantapur factory in Andhra Pradesh but the company has plans to export it to multiple RHD and LHD markets. GlobalData estimates an initial annual production capacity of 35,000 units for the vehicle.

Bakar Sadik Agwan, Senior Automotive Consulting Analyst at GlobalData, comments: “Kia Motors, like its parent Hyundai group, has been able to sense the market trends and bring in competitive products at the right time. This is evident from the launch of Seltos back in 2019 and Sonet in 2020 when markets for compact and sub-compact SUVs were heated up, respectively.”

An analysis of launches over past few years indicates that now with most OEMs well positioned in sub-compact and compact 5-seater SUV segment, three-row SUV and MPVs is the next battleground. The year of 2021 remained a year for three-row vehicles and witnessed five new launches in the segment while 2022 started with launch of Kia Carens and more three-row products are expected to be launched this year.

Most of the launches made over the past few years are available both in 5-seat and 7-seat variants which indicate that there’s an increasing consumer inclination towards bigger-size/family vehicles in India in the mass market segment. The same is also evident from the squeezing share of hatchbacks and sedans. And OEMs are now aiming to leverage the opportunity by bridging the gap, especially with new MPVs.

According to GlobalData, the MPV and SUV segments have been growing at a CAGR of 7.8% and 16% over the past five years. While the sub-compact segment remains the leader, the mid-size, compact and MPV segment has been able to maintain their relevance in the Indian market.

“MPVs undoubtedly make more practical sense for the Indian customers given that it has more capacity, better fuel economy, is relatively cheaper than SUVs and give a sense of a big car. The MPV segment has maintained robust growth over past few years despite limited product availability.