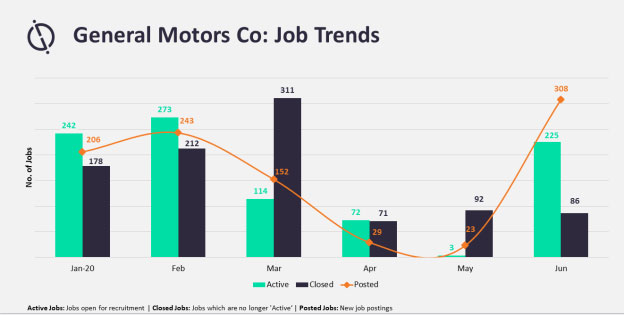 General Motors’ (GM) job postings rebounded from 23 in May to 308 in June 2020 after remaining subdued for the past few months, according to GlobalData’s Job Analytics Platform. While June’s figures were noted to be the highest of all months during the first half (H1) of 2020, hiring post shutdown may not be all that easy for the company.

Aurojyoti Bose, Lead Analyst at GlobalData, says: “Workers are likely to prefer to remain unemployed and claim the federal COVID-19 Aid (offering US$600 per week), along with additional state unemployment benefits. GM has also been facing a catch-22 situation, with labor unions asking to close plants in some states experiencing a spike in COVID-19 cases – all the while the company is feeling the pressure to increase production.”

The company remains focused on the development of electric and autonomous vehicles under its Cruise mission. GM sees massive opportunity in the EV space and has already laid down a roadmap that could see US$20bn investments over the next five years and launch of around 20 EV models by 2023.

David Leggett, Automotive Analyst at GlobalData, comments: “As the automotive industry recovers from the impact of COVID-19, EVs are emerging as a sustainability growth pole, with new product introductions and sales set to rise sharply. GlobalData forecasts that, by 2030, the global electric light vehicle market will be in excess of 12 million units a year compared with under 2.5 million in 2020, so GM will be eager to tap into this market.”

Bose continues: “Although GM looks to be optimistic, a lot will depend on how the demand for new vehicles shapes up. It will be interesting to see if the hiring momentum persists during the coming months.

Aurojyoti Bose, Lead Analyst at GlobalData, says: “The spike in job postings seems to be in line with the company’s increase in production capacity in some of its facilities following GM’s CEO Mary Barra’s statement in June 2020 that hinted at returning back to full production by the end of the month.

Bose adds: “The upward hiring trend could be an indication that GM, after a temporary halt due to COVID-19, is again gearing up for its ambitious EV and defense programs.”