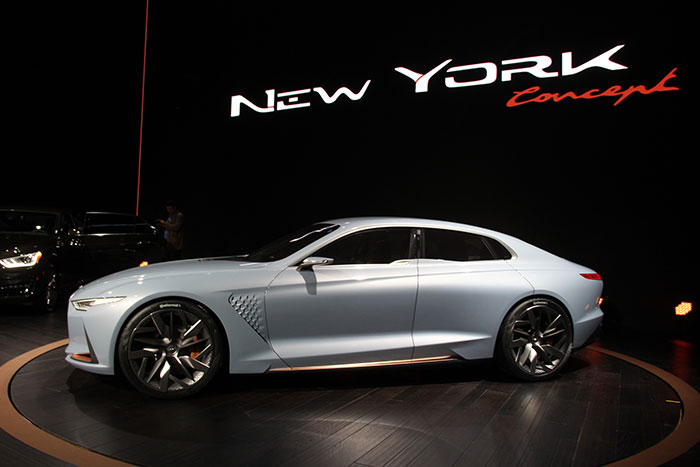 The New York International Auto Show (NYIAS) proved to the world that 2016 is the year of the SUV—not the gas-guzzling 4-wheel-drive, but a new line of sophisticated machines that is at the cutting edge of the perfect balance of fuel efficiency and power—that would rule the world in 2017. The marquee event opened on Saturday, March 26th and ran for over a week, with the last public viewing day on Sunday, April 3rd at the renowned Jacob Javits Convention Center.

The Big Boys Come Out to Play

NYIAS enjoys a storied history of being one of the world’s largest automotive shows and America’s first open automotive show, with origins dating back to the year 1900. This year’s show was an auto connoisseur’s palette of old and new, with retro-futuristic releases such as the Mini John Cooper Works Convertible going tire to tire with the aesthetics and functions of tomorrow with the Genesis Hybrid Sports Sedan concept—aptly titled the ‘New York Concept’. However, the show belonged to the big boys—the SUVs and luxury sports sedans—whose 2017 models bode well for the market in energy-efficient consumer SUVs. The notable favorites of the group were Jeep’s Grand Cherokee Trailhawk and the revered Grand Cherokee Summit. The 2017 Trailhawk traces its history back to its 2012 debut as a concept car but has added more muscle to its looks and under the hood with a 10.8-inch ground clearance with an adjustable air suspension and a Hemi V-8 engine, making it the cynosure of the show. Other notables in the SUV segment were the new sports hybrid Acura MDX and a spectacular makeover of the Buick Encore.

Another big winner at NYIAS was one of its consistent players—Lincoln. For years, the American luxury automaker remained sidelined until the debut of the quad-exhaust super-sedan, the Continental Concept. This year marked Lincoln’s second outstanding showing with the big and beautiful Lincoln Navigator Concept, a richly adorned executive SUV whose performance and interiors could put most luxury offices to shame.

Among the debutants at the show were cars that are sure to rock the world in the next few weeks—the first of them being the 2017 Audi R8 Spyder convertible that hides a 580-hp V10 engine under its deceptively compact shell. Chevrolet’s newest sixth-generation Camaro—lived up to the family name with the Camaro ZL1, a proud return to the V8 engine of one of the world’s beloved muscle cars. Putting out a thundering 640 horsepower through a six-speed manual and a mind-bending ten-speed automatic transmission, the Camaro ZL1 represents a big win for Chevrolet in the segment. The Fiat 124 Spider Elaborazione Abarth brought a touch of the exotic to NYIAS, but it was the Korean Genesis New York concept that stole the show. What is outstanding about the Genesis concept is the fact that it makes the future all too believable—making its ultra-futuristic design appealing and believable enough for today, yet desirable enough for decades to come. The Mazda MX-5 Miata RF was another exciting debut, and may soon be seen in the hands of the rich and famous. Some cars even crossed over into the realm of the unbelievable, such as the Koenigsegg Regera supercar whose V8 engine generates a jaw-dropping 1,500 horses.