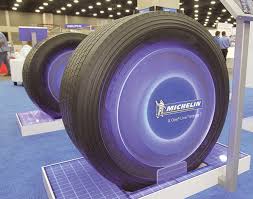 Leading tire manufacturer, Michelin has predicted that there would be a general decrease in demand for passenger car tires and truck tires thanks to many factors like the strict new EU emissions norms and the slowdown in China. The company has stated that it expects sales to slump in the fourth quarter of this year.

The company expects its own sales volumes to show only a “slight increase” for the entire 2018. Based on expectations of greater demand, it has earlier predicted that sales would be higher in this year.
The company’s Chief Finance Officer Marc Henry told members of the media in a call that the impact of the decrease in demand in China for truck and car tires and the effect of the slowdown in new registrations in China was a lot higher than expected.

“All of these markets are going to be in decline by comparison with the forecasts we had made,” he said.

In the third quarter, Michelin had posted a 5.2 percent increase in third-quarter revenue to USD 6.44 billion. But it should be noted that this was despite decrease of 5 percent to car manufacturers in China and Western Europe where there have been withdrawals and delays in approval thanks to the tougher new Worldwide Harmonised Light Vehicle Test (WLTP).

Michelin had earlier set itself the goal of increasing 2018 recurring operating profit, with growth projected to amount to at least 200 million euros without taking the effect of exchange-rate fluctuations into account.
But it slashed 2018 market growth forecasts to 0.5 percent for car tires, instead of the previously forecast 1.5 percent; and to a 1.5 percent decline in truck tires rather than a 0.5 percent expansion.