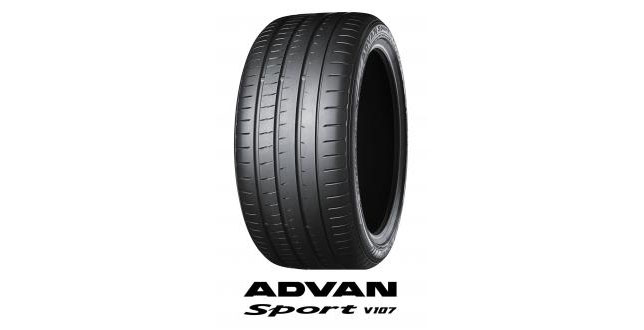 The “ADVAN Sport V107” is a high-performance tire in YOKOHAMA’s global flagship ADVAN brand. The tires being supplied to BMW M were jointly developed with the automaker and feature a specially developed compound and a tread pattern with the groove area adjusted to achieve superior dry performance and wear resistance. The tire also has received the EU labeling system’s highest “A” grade for wet performance. Its mound profile provides uniform surface contact that further contributes to superior its dry performance and wear resistance. Structurally, the carcass, considered to be the skeletal frame of the tire, is composed of specially made cords, and the belt has a larger angle than replacement tires, which tightens the belt’s grip on the carcass. This tire structure delivers the direct handling and high steering stability essential for high-power premium cars. The superior performance of this tire developed especially for new M3 Sedan and M4 Coupe was confirmed through test runs at Nürburgring, widely considered to be the world’s harshest test circuit, with a length of about 25km, 200 corners, and an elevation differential of 300m. This jointly developed version of the “ADVAN Sport V107” is indeed a tire most suitable for the new BMW M models, as it contributes to their extraordinary high performance on public roads as well as race circuits. BMW M cars use OE tires from a select group of tiremakers, and the sidewall of all selected tires, including this “ADVAN Sport V107”, bear BMW’s star mark symbol of approval, which indicates the German automakers’ recognition of the tiremakers’ technical capabilities, quality, and reliability.

The Yokohama Rubber–BMW M3 relation has been developed over many years of successful cooperation in motorsports, with BMW teams racing on high-performance YOKOHAMA racing tires winning many top races over the years, starting with Schnitzer Motorsport’s BMW M3 capturing the first World Touring Car Championship in 1987 and then winning the European Touring Car Championship in 1988. BMW M3s running on YOKOHAMA tires also have chalked up victories at the endurance races in the United States and Europe, including a combined total of five 24-Hours Nürburgring and Spa-Francorchamps 24 Hours races, two of the world’s elite road endurance races, 1998 wins at Florida’s 24 Hours of Daytona, and 12 Hours of Sebring.

The consumer tire business in Yokohama Rubber’s new three-year (2021–2023) medium-term management plan, Yokohama Transformation 2023 (YX2023), aims to maximize the sales ratios of high-value-added YOKOHAMA tires, namely the global flagship ADVAN brand, the GEOLANDAR brand of tires for SUVs and pickup trucks, and various winter tires. One of the key initiatives being implemented under this strategy is the expansion of ADVAN and GEOLANDAR tires as original equipment on new cars.