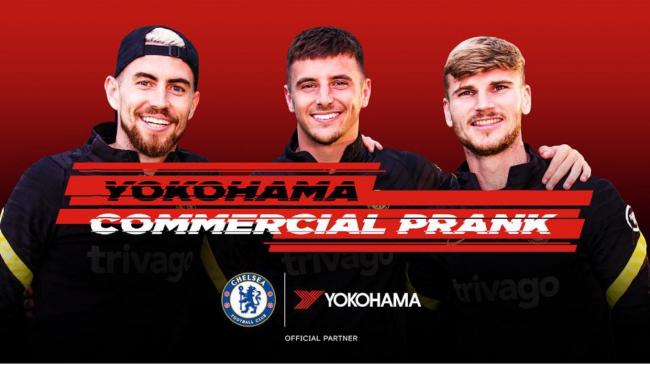 The Yokohama Rubber Co., Ltd. announced today that it has posted an amusing new video featuring players from Chelsea Football Club (FC) of the English Premier League. Yokohama Rubber serves as Chelsea FC’s Official Global Tyre Partner and the video was produced with subtitles in 13 languages, including English, Japanese, and Spanish to be shared with viewers around the world.

The English version of the video was released in advance on October 4 on the Chelsea FC and YOKOHAMA x Chelsea FC official SNS sites. Titled “YOKOHAMA COMMERCIAL PRANK”, it features three of the club’s star players involved in a hilarious joke. In the video, Mason Mount and Jorginho pranked their teammate, Timo Werner, who thought he was actually filming the latest Yokohama Tyres commercial. The video is meant to be enjoyed by a wide range of viewers, in addition to Chelsea FC and other football fans, and instill viewers with a new awareness and affinity for Yokohama Rubber.

Yokohama Rubber will continue its relentless efforts to hone its skills as a company and seek to emulate Chelsea FC, a sports team that enjoys global fan support while working together and engaging in wholesome competition with rivals from around the world. As a player in the global tyre market, Yokohama Rubber will endeavor to enhance its brand strength, expand sales, and achieve the goals of Yokohama Transformation 2023 (YX2023) medium-term management plan for fiscal years 2021-2023.