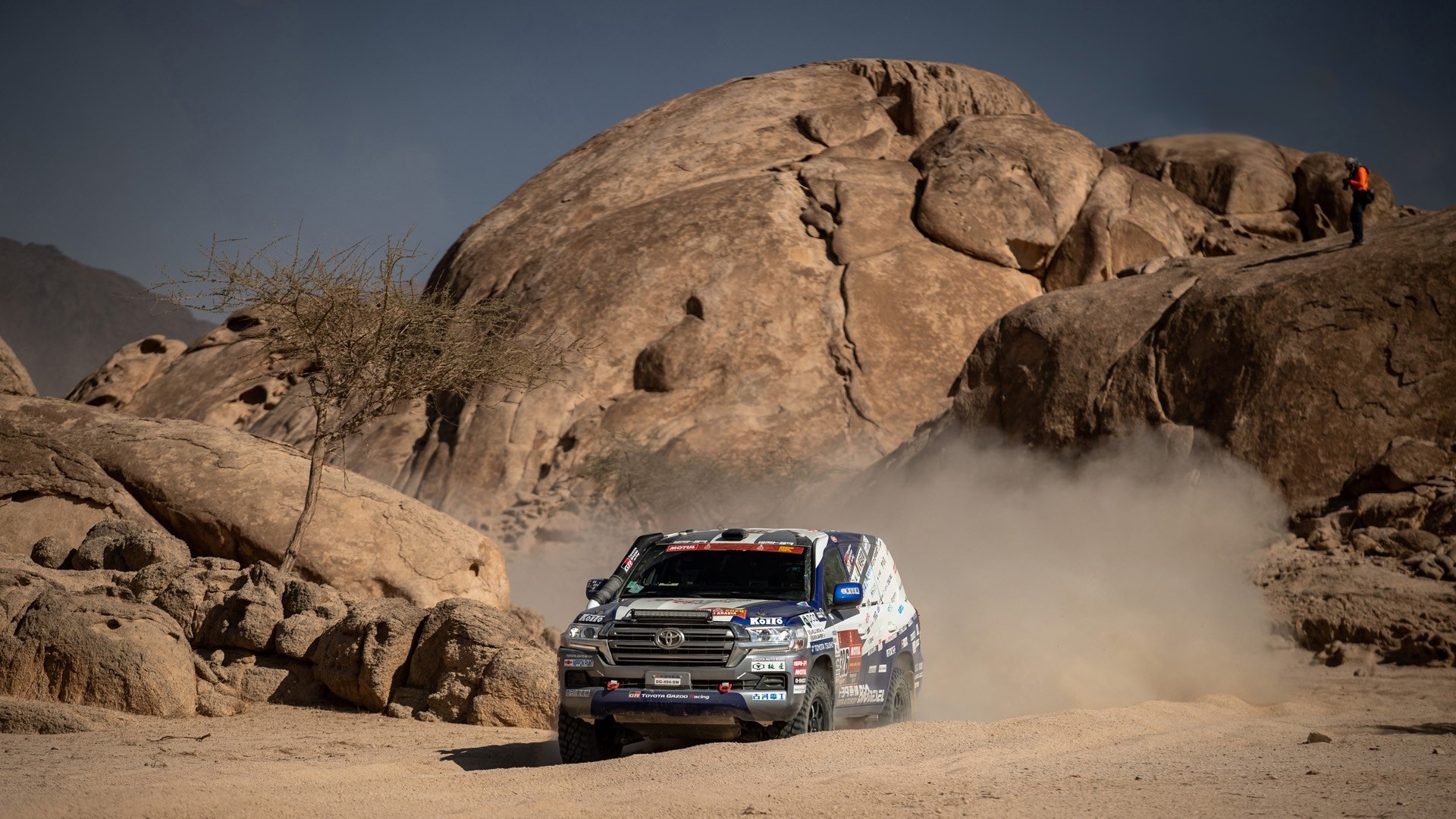 Toyota celebrates another outstanding performance at Dakar 2021 in Saudi Arabia

Toyota has proved once again the capabilities of its vehicles on all terrains, and harsh climatic conditions, with a spectacular performance at the world’s most extreme motorsports event, the Dakar Rally. Toyota’s iconic Land Cruiser continued to dominate the Production Car category, with the Toyota Auto Body team claiming a spectacular one-two victory. Akira Miura and Laurent Lichtleuchter took first place in the No. 340 Toyota Land Cruiser, while teammates Ronald Basso and Jean-Michel Polato finished as runners-up in the No. 345 Toyota Land Cruiser. This incredible milestone means that the Land Cruiser has now achieved eight consecutive championship wins at the Dakar Rally.

Meanwhile, GAZOO Racing (GR)’s Nasser Al-Attiyah and navigator Mathieu Baumel achieved second place in the Four-Wheel Drive category after securing five stage victories in the No. 301 GR Toyota Hilux. The Hilux proved a runaway success at this year’s rally, with various drivers winning eight out of the 12 stages behind the wheel of the model at the legendary race.

Akio Toyoda, President, Toyota Motor Corporation, commented: “Congratulations to all Team Land Cruiser Toyota Auto Body team members for their eighth straight victory, and to Miura san and Lichtleuchter for winning the championship! I would also like to congratulate Al-Attiyah and Baumel for taking on the challenge in the Hilux, finishing second overall. I think it’s a wonderful result because they never gave up and continued to trust their partners, the team, and people who supported them.”

Toyoda continued: “I think this year’s Dakar was very unique. It was a very significant day for the automobile industry to be able to compete at a rally held under such challenging circumstances. Taking advantage of this experience, we at Toyota will continue our efforts to make ever-better cars. We’re grateful to all the fans and appreciate your continued support. Thank you very much to all our fans everywhere.”

The 2021 edition of the Dakar Rally was held in Saudi Arabia and kicked off with a Prologue on January 2 to determine starting positions on the outskirts of Jeddah. Al-Attiyah and Baumel, who have previously won the 2019 Dakar Rally and took second place last year, got off to the best possible start in the No. 301 GR Toyota Hilux after finishing fastest on the 11-kilometre route.

Nasser Al-Attiyah, Driver of the No. 301 GR Toyota Hilux, commented: “This is a fantastic result for us. I’m really proud of the team and would like to thank the entire GR team for the hard work they’ve put in to make this a reality.”

Akira Miura, Driver of the No. 340 Toyota Land Cruiser, said: “In this year’s Dakar Rally, I maintained a positive outlook every day, and I really enjoyed the driving in a very good way. I believe this is why we were able to win. I could strongly feel how much everyone contributed to creating an environment that enabled a focus on the driver. I am overwhelmed with gratitude.”

Over the years, Toyota has been participating in many different forms of motorsports, ‎including Formula One, the World Endurance Championship (WEC), and the Nürburgring 24 ‎Hours endurance race. Toyota’s participation in these events was overseen by separate ‎entities within the company until April 2015, when Toyota established GR, ‎to consolidate all its motorsport activities under one in-house brand. Representing ‎Toyota’s belief that ‘the roads build the people, and the people build the cars,’ GR highlights the role of motorsports as a fundamental pillar of Toyota’s commitment to ‎making ‘ever-better’ cars. Harnessing years of experience gained under the extreme ‎conditions of various motorsports events, GR aims to forge new ‎technologies and solutions that bring the freedom, adventure, and joy of driving to everyone.