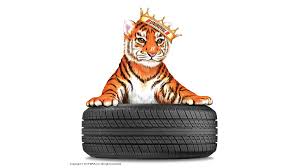 Michelin North America Inc. which owns the Uniroyal brand in North America has revamped its iconic Uniroyal Tire tiger mascot into “Royal”. “Royal” is a tiger cub which sports a crown and sits inside a Uniroyal tire.

Uniroyal has been associated with a tiger right from the 1960s, with the launch of the Tiger Paw range of  tires and a cartoon tiger that was the star in Uniroyal ads. Tiger Paw tires still comprise a large part of Uniroyal’s portfolio. The new mascot has been created in the runup to Uniroyal’s largest product launch ever in its history: the Tiger Paw Touring All-Season, which will be available at the retail level from the month of June, according to the company.

Commenting on the new mascot, Uniroyal’s brand director, Olivia Le Meur, said that the tiger is reliably strong and protective just like Uniroyal tires. The tiger has been associated with Uniroyal’s tires for over 50 years and with the company preparing for a massive product launch, that brand wanted a mascot that would help it tell its story.

Uniroyal commissioned artist Jared Emerson to come up with a new take on Royal the tiger. He conceptualized Royal as a tiger cub, lending the brand a more family friendly feel.

The tiger’s name, “Royal,” is another connection to the brand’s heritage. Uniroyal was previously named as U.S. Royal and has remained a Uniroyal trademark for decades. The new mascot comes with a crown to highlight the mascot’s symbolic name.

Royal will be used in various settings and poses with Uniroyal preparing to launch over 100 sizes of the Uniroyal Tiger Paw Touring A/S tire in 2019.

The mascot has been revamped less than one year after Michelin became the partner of a World Wildlife Fund program that has been established with the goal of doubling the number of tigers in the wild by 2022. As part of the collaboration, Michelin has undertaken to donate at least USD 150,000 annually to the WWF for the next five years on behalf of its Uniroyal brand—and its Tiger Paw line of tires. The tire manufacturer has invited its dealers and consumers to also participate in the program.