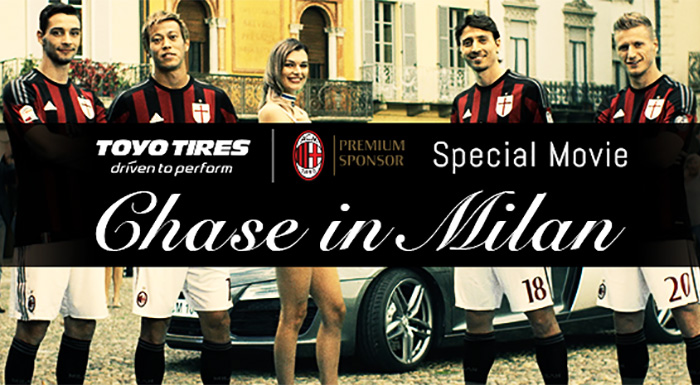 Toyo Tires Teams Up with AC Milan for New Movie

Japanese tire company, Toyo Tire & Rubber Co., Ltd. had created significant impact world wide last year with its AC Milan fan film “Driven to perform. To SAN SIRO.” Now the company has announced that it has again teamed up with the AC Milan football club to make a new collaborative video called ‘Chase in Milan’ that was released globally on Thursday, December 10, 2015.

In order to boost Toyo’s brand awareness on a global basis, AC Milan had agreed to work with the company on a number of collaborative campaigns as part of their sponsorship agreement. This film which has been uploaded on YouTube is one such campaign and will feature leading players from AC Milan including Mattia De Sciglio, Keisuke Honda, Ricardo Montolivo and Ignazio Abate.

The video has been picturized on the busy streets of Milan and depicts a pair of bank robbers who come across the AC Milan stars. The footballers chase down the robbers in an Audi R8 car that has been fitted with Toyo’s Proxes T1 Sport tires. The stars eventually prevent the thieves from escaping while showcasing their teamwork and ball control skills.

Toyo has been operating for 40 years in the European market with a wide range of high-performance tires for passenger cars. In the past four decades, the company has become a trusted tire brand on the continent and the new video with AC Milan will propel Toyo to even greater heights.