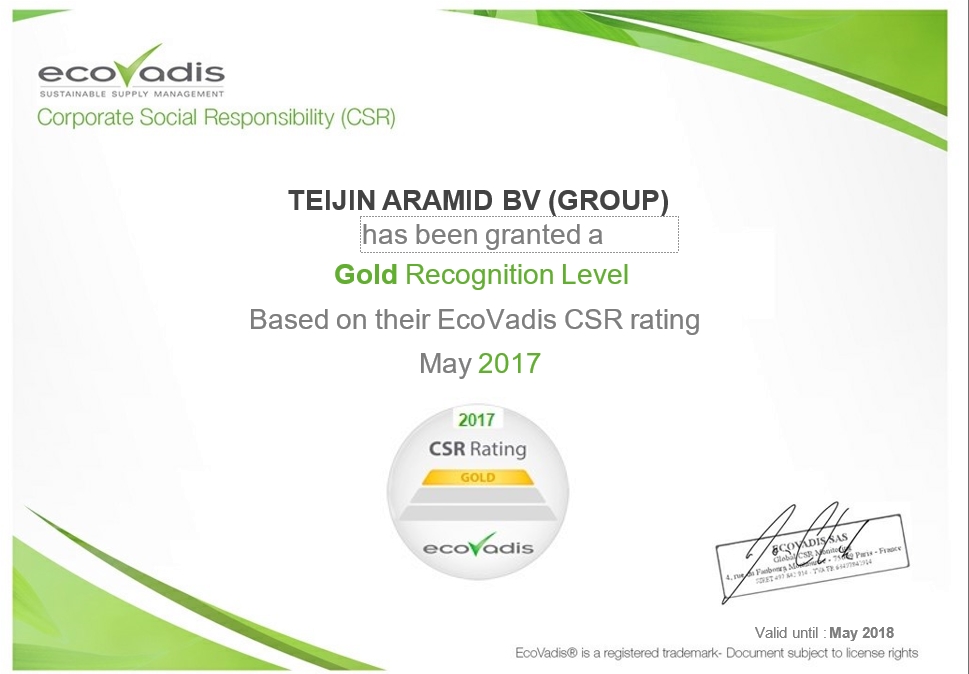 Teijin Aramid, one of the leading suppliers of Aramid recently received a certificate from EcoVadis qualifying the company as a Gold Partner and acknowledging its sustainability efforts in the automotive market. Teijin Aramid supplies aramid for most of the top tire manufacturers. They use the para-aramid Twaron to produce their high performance tires. EcoVadis operates the first collaborative platform that rates global chains on the basis of their initiatives regarding sustainability and provides Supplier Sustainability Ratings.

Environmental and sustainability standards have become increasingly stringent in the automotive segment over the past few years. This is the reason why certificates like those issued by EcoVadis are highly prized.

Teijin Aramid has spent focused on research for many decades in order to gain a strong position in the high performance tire market. One example of a high performance tire in which Twaron has been used is the Michelin Pilot Super Sport, which was launched in 2011. It is expected that the request for a similar certificate will also be seen in other markets.

EcoVadis is an independent Sustainability Rating platform that allows companies to record, evaluate and communicate their standards, measures and activities to back their corporate social responsibility initiatives. EcoVadis launched a platform in 2007 which rates suppliers with regard to their sustainability efforts and results.

Teijin Aramid became a member of EcoVadis in 2015. Commenting on the Gold Partner Certificate, Gert Frederiks, Teijin aramid’s CEO and president said, “We are very proud to receive this Gold Partner certificate from EcoVadis. It shows that we operate fair and sustainable in all aspects. Having an external and well respected player stating this, is an appreciation for all our efforts. And we will certainly continue with that.’

The annual report rates companies based on four criteria: environment, sustainable procurement, working conditions, and fair business processes. Based on the results from all completed online EcoVadis reports, Teijin Aramid belongs to the top 2 per cent of all suppliers in the category Synthetic Fiber Production and to the top 1 per centof suppliers in all categories.