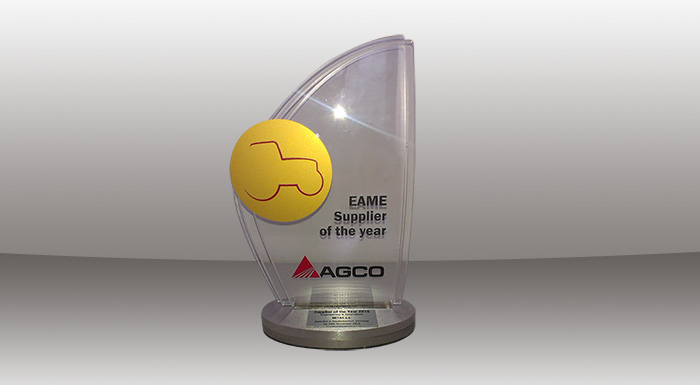 Mitas Bags AGCO Supplier of the Year award for AirCell

Mitas Bags AGCO Supplier of the Year award for AirCell

Mitas, one of the leading manufacturers of agricultural tires in Europe, bagged the Supplier of the Year award from AGCO in the category Engineering & Innovation. The award was given to Mitas representatives during AGCO´s supplier day for the EAME region (Europe, Africa and Middle East) which was held at the end of November in Marktoberdorf, Germany. Mitas earned the award primarily due its outstanding work on the development of the AirCell tire, a crucial component of the Fendt VarioGrip Pro system.

The Mitas AirCell is a unique inner tire that makes it possible to inflate even large agricultural tires by 1 bar (from 0.8 bar to 1.8 bar) in just 30 seconds. Mitas AirCell is located on the rim inside the tire andtakes up about 30 per cent of the tire’s volume.

Currently, Mitas AirCell has been designed for the Mitas 710/75 R42 SFT, with other sizes soon to follow. As the tire is used, the AirCell is continuously inflated to a maximum of 8 bar. When some of the pressure is released, it results in a rapid influx of pressure into the agricultural tire itself making it possible to adjust the pressure in seconds rather than minutes. The unique tyre pressure inflation system is marketed as VarioGrip Pro. Mitas AirCell will be available for the Fendt 900 Vario equipped with Mitas 710/75 R42 SFT starting in November 2016.

Speaking about the award, Jens Steinhardt, Mitas’ key account manager said that Mitas has a long-lasting relationship with Agco and the cooperation with Fendt on the AirCell project, which is part of the VarioGrip Pro, had spectacular results. The Supplier award from AGCO is the third such award Mitas has received for the AirCell tire, with the company receiving the Agritechnica Gold Medal and the Machine of the Year 2016 prizes earlier in the year for the same project.

Dr. Heribert Reiter, AGCO´s Vice President Engineering Tractors global, spoke at length during the event about the successful partnership between Mitas and Fendt, especially when it came to the design of their VarioGrip Pro System and the development of the AirCell.

Mitas first began collaborating with Fendt on the AirCell development seven years ago. The AirCell is a key component of Fendt’s VarioGrip Pro along with the pressure regulation system. Though the idea for the inner tire was initially patented back in 1962, all other major tire manufacturers failed to come up with a viable working solution and it was the Mitas & Fendt team which succeeded in practically translating the idea into a feasible product.