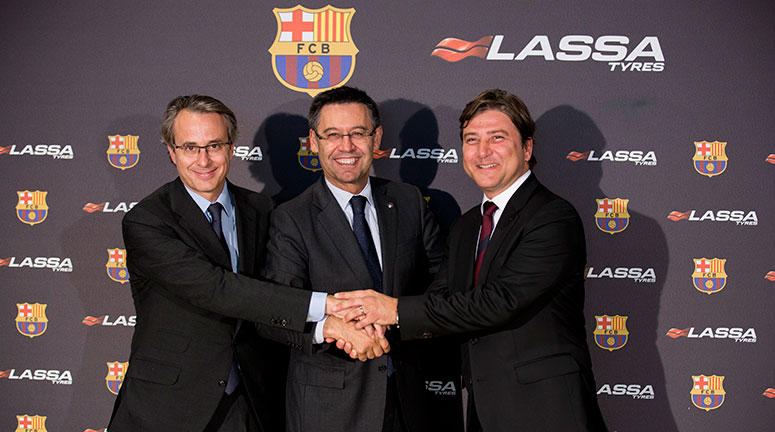 Many tire companies are partnering with popular football clubs to boost brand awareness. These include Yokohama’s partnership with Chelsea, Toyo’s with AC Milan, Cooper Tires deal with Arsenal. Turkish tire manufacturer, Lassa Tyres has joined the act and will be using its partnership with the Spanish club, FC Barcelona to good effect in its forthcoming global TV campaign. Stars like Suarez, Pique, Neymar, Rakitic and the captains of the FC Barcelona handball and basketball teams will be featured in the ad campaign.

The company did a soft launch of its first TV campaign in December last year and began the rollout of the main campaign during the weekend of 20-21 February 2016. With the slogan, “the tire that never tires”, the campaign will seek to strengthen the brand values of Lassa Tyres’ brand values while utilizing the FC Barcelona link to connect with millions of soccer fans across the globe. Lassa’s 30 second ad campaign on the Eurosport channel will be broadcast in over 54 countries and will run until May 2016.

Lassa partnership with FC Barcelona covers not only the activities of the football club but also extends to the club’s handball and basket ball teams and the captains of these teams, Navarro and Thomas will also be featured prominently in the ad.

The ad film emphasizes the high durability and strong performance of Lassa tires by picturizing them as a reliable training partner for the successful club, FC Barcelona. Together, the two partners help each other to tackle a wide range of tough challenges and live up to the high reputation they have established in the minds of customers. The partnership aspect is highlighted in a humorous manner with the tagline: “Barca’s Best Kept Secret”.

Speaking about the new TV campaign, Halit Sensoy, director of international sales and marketing at Brisa, the holding company of Lassa Tyres, said: “In our main global TV campaign, we aimed to demonstrate the benefits of Lassa tyres in an emotional way, linked with our global FC Barcelona partnership and delivering on Lassa Tyres’ brand motto ‘tire that never tires”.