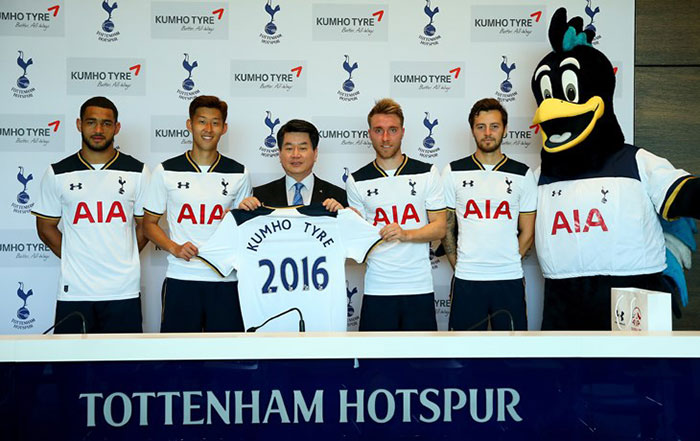 Love for football has no barriers when it comes to nationality or culture. As a game that has millions of fans across the world, football clubs are a popular choice when it comes to choosing partners for sports marketing. Cooper chose to sign a deal with Arsenal while Apollo is the sponsor for the popular Manchester United Team. Yokohama is Chelsea’s shirt sponsor and Hankook has recently signed a deal with Real Madrid. Now, Kumho Tyre has signed a two year sponsorship deal with Tottenham Hotspur making the Korean tire manufacturer the club’s “Official Tire Partner” from the beginning of the 2016-17 season.

As part of the deal, Kumho will benefit from a strong advertising presence at the club’s home matches and on its digital channels. This will help Kumho Tyre to enhance brand awareness and their sales in the UK market. Kumho will also become the presenting partner of the Club’s match day player mascot program and work with the club’s award-winning Foundation on developing a customized community initiative.

Daniel Levy, chairman of Tottenham Hotspur, said: “We are delighted to announce this partnership with Kumho Tyre. We look forward to collaborating with them on their brand and business objectives both here in the UK and globally in their key markets. We also greatly welcome their enthusiasm to support and work with our Foundation.”

Han-Seob Lee, resident and CEO of Kumho Tire Co., Inc. said that the company was thrilled to work with such a popular football club and is hoping to use the sponsorship as a platform to connect with consumers across the world.