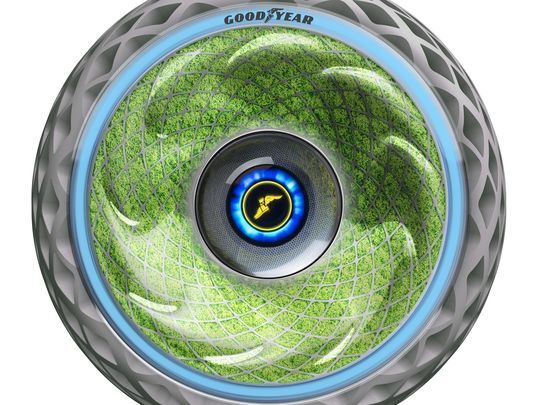 Sustainability is the latest buzzword in the automotive industry and Goodyear appears to have taken this to heart by launching a living tire called Oxygene at the recent Geneva Motor Show. The pathbreaking concept tire is specially designed to hold living moss inside. The moss is meant to absorb water from the road and release oxygen. Thus, the moss used inside the tire would contribute to air quality with the aid of photosynthesis.

It is unlikely that the Oxygene tire would ever become a reality but the tire gives an idea about the leadership position that Goodyear is seeking in terms of environmental credentials. With the tire industry struggling to tackle the issue of disposal or recycling millions of used tires, the issue of green tire technology is very much in focus in the tire industry. This is probably what prompted Goodyear to come up with a tire that could potentially improve the air quality.

Commenting on the tire, Chris Delaney, president of Goodyear’s Europe, Middle East and Africa markets said in a statement that Oxygene, like other concept tires that Goodyear has showcased in the past was meant to set off a debate about smart, safe and sustainable future mobility while challenging everyone to think. He added, “By contributing in this way to cleaner air generation, the tire could help enhance quality of life and health for city-dwellers.”

Some of the notable features of the Oxygen tire are:
• The incorporation of living moss in the sidewall of the tire so that the moss could absorb moisture through its tread. The moss would take in carbon dioxide and release oxygen into the air.
• The energy that is created as an outcome of photosynthesis would be used as a source of power. It would power sensors, artificial intelligence and a light strip which would have different colors in order to warn other motorists and pedestrians about the vehicle’s movements.
• The tire will have a 3-D-printed structure comprising rubber powder from recycled tires.
• The tire would have LiFi, a play on the term “WiFi”. LiFi is the abbreviation for visible light communication system, a technology that would make it possible for the tire to communicate wirelessly with vehicle infrastructure and other cars, helping vehicles to move one step ahead when it comes to vehicle autonomy.