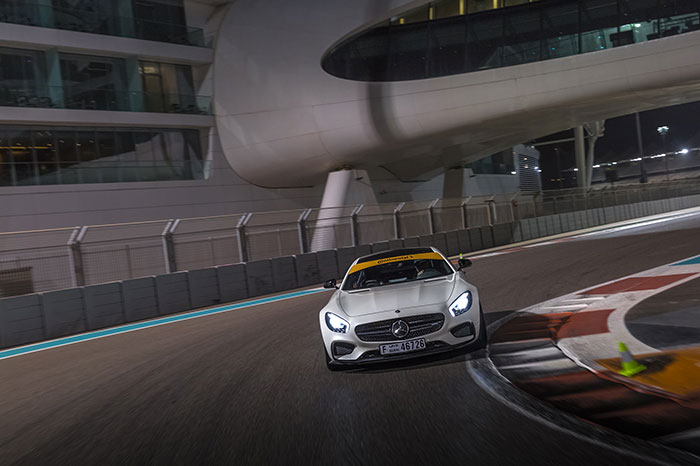 Continental, the German manufacturer of premium tires teamed up with Mercedes-AMG to showcase the excellence of German engineering. The four-day test drive event at the famous Yas Marina Circuit in Abu Dhabi which was held in a rally car format was attended by more than 160 distinguished guests including VIP customers, members of the media and delegates from all over the Middle East.

At the famous Formula One track, attendees had a chance to test drive 11 Mercedes-AMG models which were fitted with ContiSportContact tires. During the slalom testing phase, the tires from Continental added to the drivability of the Mercedes-AMG cars with their superior handling and outstanding grip. The ContiSportContact tire was specially designed for sports and high-performance vehicles and is the ideal complement for AMG models including the G63, the highly powerful GTS, the CLA 45 and a number of V8 super-charged SUVs including the GLE coupe.

Speaking about Continental’s participation in the event, Nikos Kontos, Continental Head of Marketing in the Middle East, said that the company has been collaborating closely with Mercedes-AMG from 2010 to give customers a chance to experience the excellence of German engineering on a first-hand basis. Events like the test drive at the Yas Marina circuit serve to reaffirms Continental’s positioning as a global leader in the manufacture of premium tires. Continental is not only a leading tire manufacturer but also a technological pioneer in the manufacture of many automotive components like fuel pumps, brake systems, sensors and ECUs and all these components have been used in AMG models.

In terms of the company’s future direction, Kontos added: “We will focus further on accelerating our partnership with Mercedes-AMG, as both brands look to continue to develop cutting edge technologies which maximise performance.”

Continental initially joined hands with Mercedes to open the AMG Driving Academy which gives fans of both brands chances to drive Mercedes models on leading racing tracks. The partnership evolved over the years and ContiSportContact tires were used on several AMG models culminating in many drive events which were held across the globe.

The ContiSportContact range, suitable both for Sport as well as SUV vehicles, is now available across the Middle East.