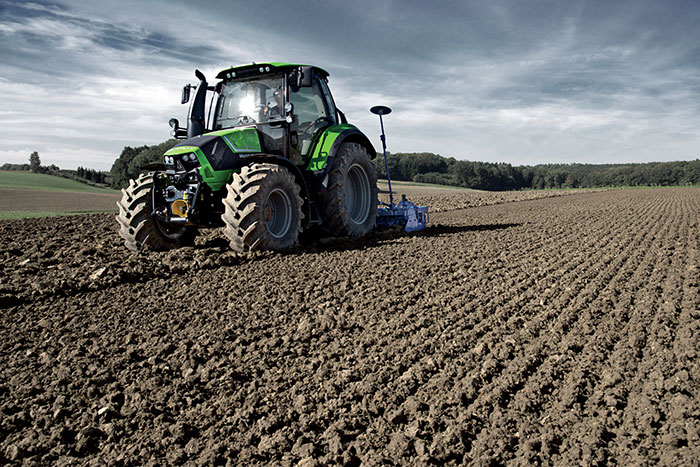 BKT played a key role at three important three-day “Future Farming” event that was promoted by SDF. The OTR tire manufacturer from India was not only a sponsor of the event but was also in the limelight as an OE supplier as BKT supplied the new 6 and 7 tractor series of the Deutz-Fahr range with its best tires from the Agrimax range. While the 9 series was fitted with the Agrimax Force, the Agrimax RT 657 was used for the 6 and 7 Series, and the Agrimax RT 765 was used for the 7 Series. All these tires have been specifically designed for tractors and their wide range of applications.

The Agrimax Force tire is arguably the most well known tire in the BKT product range and offers users just the right blend of resistance, productivity, efficiency and flexibility. It is just the right fit for vehicles like the 9 Series tractor from Deutz-Fahr, as it ensures the best performance from the tractor both on the road and in the field. The use of BKT’s proprietary IF technology makes it possible for the Agrimax Force to operate at low pressure. This minimizes soil compaction and customers do not need to change the tire’s inflation pressure when they move from the field to the road and vice versa. BKT used the Deutz-Fahr event to showcase the tire in sizes IF 650/65 R 34, IF 710/75 R 42 and IF 900/60 R 42.

The Agrimax RT 765 tire is a radial tire that belongs to the 70’ Series and has been fashioned from a new-generation compound that has been customized for use under the harshest conditions. This tire is meant for the heaviest tractor applications and provides outstanding resistance against cuts and abrasions. The tire which is notable for its high durability, minimal soil compaction and excellent traction will help farmers to increase the yield and fertility of the soil. Agrimax RT 765 can be used in the DEUTZ-FAHR 7 Series with its two sizes 710/70 R 38 and 600/70 R 30.

Commenting on BKT’s role at the event, Lucia Salmaso, BKT Europe’s Managing Director, said that the nature of the three tires highlighted at the show attested to the brilliance of the company’s R&D team at a project level. It also reflected BKT’s capacity to come up with premium tires that meet the needs of modern farmers. With BKT striving to expand its presence in the OEM segment, such events and partners like SDF will become increasingly important in the company’s drive to boost brand awareness.