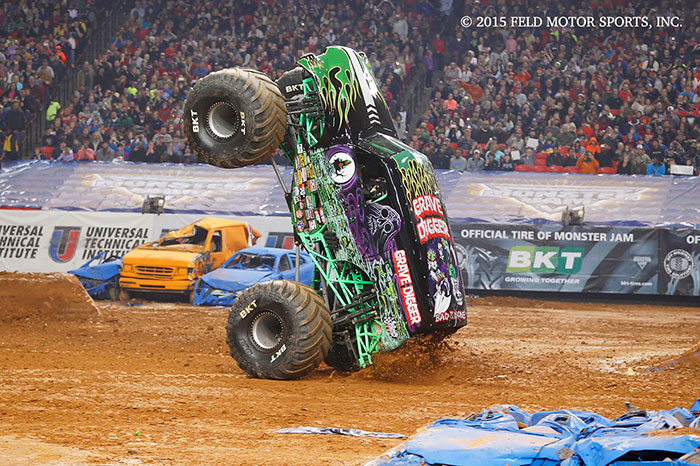 For the third consecutive, well-known of-highway tire manufacturer, BKT is the official and exclusive tire partner for the Monster Jam Tour. The 18th edition of the Monster Jam Tour will return this year to Europe, covering as many as seven cities spread across five countries. The tour features events comrising acrobatic stunts, jumps and timed races between highly modified monster trucks and has gained increasing number of fans over the years, with the event now attracting an audience of over 4 million spectators spread across many countries in the world.

The first event of the Monster Jam Tour this year will be held in Estadi Olímpic Lluís Companys in Barcelona on June 4 and then the tour will proceed to Madrid where a race will be held on June 11 in Madrid – Vicente Calderón Stadium. Rotterdam, Cardiff, Gothenburg and Frankfurt are other stops that have been scheduled and the tour will end with a grand finale at the Friends Arena in Stockholm on November 12.

The spectacular trucks and their drivers which have been showcased at the Monster Jam events have gained a loyal fan following and every event involves spectacular displays in which the trucks put on a show that is truly worth watching.

BKT provides all the trucks with customized tires that make it possible for the trucks to perform these amazing stunts. The company designs tires for the Monster Jam trucks that provide the inpidual teams with the highest levels of safety, impact resistance and performance for all kinds of action.

This year too, BKT has chosen to continue its agreement with Feld Motor Sports®, the producer of Monster Jam world tours to be the official and exclusive tire manufacturer of Monster Jam as the company has reaped rich pidends from its sponsorship of the thriving show that is receiving growing media attention. The partnership with the Monster Jam tour has definitely helped to a significant extent in strengthening of BKT’s positioning and promoting brand awareness on a global scale.