Home News Automotive The Honda Prize 2020 Awarded to Dr. Henning Kagermann, Chair of the Board of Trustees, – National Academy of Science and Engineering 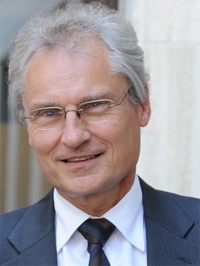 The Honda Prize 2020 Awarded to Dr. Henning Kagermann, Chair of the Board of Trustees, – National Academy of Science and Engineering

The Honda Foundation, the public interest incorporated foundation established by Soichiro Honda and his younger brother Benjiro and currently led by President Hiroto Ishida, is pleased to announce that the Honda Prize 2020 will be awarded to Dr. Henning Kagermann, Chair of the Board of Trustees, acatech – National Academy of Science and Engineering (Germany), for pioneering the principles of Industrie 4.0 to connect the digital world with reality and declaring to the world the need to examine specifically how society can shape this paradigm shift for fostering economic growth and social benefit. The Honda Prize, established in 1980 and awarded once each year, is an international award that recognizes the work of individuals or groups generating new knowledge to drive the next generation, from the standpoint of ecotechnology*2.

In 2011 and 2012, lively debate took place in Germany over bringing together the online and offline worlds. Under the direction Dr. Kagermann, acatech exercised leadership in this debate. The academy developed the concept of Cyber-Physical Systems. Altogether with Dr. Wolfgang Wahlster (founding director of the German Research Center for Artificial Intelligence) and Dr. Wolf-Dieter Lukas, (State Secretary, German Federal Ministry of Education and Research) he coined the concept and slogan Industrie 4.0, the fourth industrial revolution, reached by digital connection of all industry processes. Dr. Kagermann became the lead author of “Recommendations for Implementing the Strategic Initiative Industrie 4.0”, published in 2013, which proposed the need for total industrial optimization with digitization in all industries, including manufacturing, distribution, healthcare, social infrastructure and agriculture. On that basis, the Platform Industrie 4.0 has been founded as one of the future projects in the “German Action Plan High-Tech Strategy 2020”. In his function as Global Representative Advisor of the Platform Industrie 4.0. Dr. Kagermann supported and formed numerous bilateral and multilateral cooperation and strengthened the international debate on digital transformation.

Also known as the Fourth Industrial Revolution, Industrie 4.0 fosters development in newly emerging countries by providing the technological knowhow of industrialized countries and contributing to building a sustainable society. In continuation and extension of the initiative Industrie 4.0 he led the national working groups “Smart Services” – on platform-based business models – and “Autonomous Systems”, i.e. systems that learn through machine learning and artificial intelligence. The Prize will be awarded to Dr. Kagermann for his outstanding achievements that are worthy of the highest recognition.

This year, the presentation ceremony for the 41st Honda Prize will be held on November 17, 2020 in an online format, to be broadcast in Japan, Germany and various other countries. The medal and certification, along with an honorarium of 10 million yen, will be presented to Dr. Kagermann.