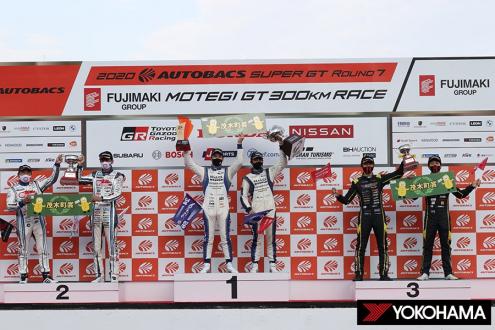 The Yokohama Rubber Co., Ltd., is pleased to announce that teams running on ADVAN racing tires dominated the winners’ podium for the GT300 class race in Round 7 of the 2020 AUTOBACS SUPER GT series, held on November 7-8 at Twin Ring Motegi in Tochigi Prefecture. The GT300 class victory in Round 7 by a Yokohama Rubber supported team follows earlier wins in Rounds 2, 5, and 6, for a total of four wins in this year’s AUTOBACS SUPER GT series, Japan’s ultimate touring car race series.

Realize Nissan Automobile Technical College GT-R’s win was its second of the season, following its GT300 class victory in Round 5, and the team heads for the season’s final Round 8 on the last weekend of November at the top of the team and driver rankings. GOODSMILE HATSUNE MIKU AMG claimed its second consecutive podium finish, and RUNUP RIVAUX GT-R achieved its first podium finish of the season.