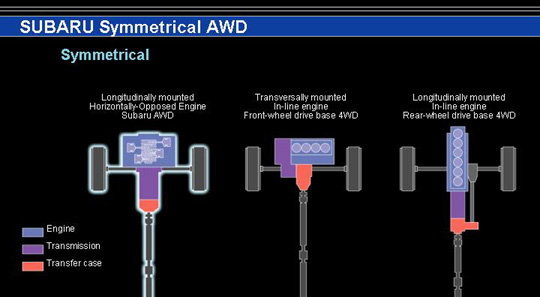 Subaru of America is now celebrating a huge milestone with the total production of its All-Wheel Drive (AWD) vehicles reaching 15 million units. This was attained in the 44th year of production of AWD vehicles with the launch of the Subaru Leone 4WD Estate Van in September 1972.

Since then, the automaker has continuously improved its AWD technology and the basic functions of its cars, with the goal to make driving not only safer but more enjoyable.

Subaru Symmetrical All-Wheel Drive is claimed to provide a combination of outstanding stability and traction inherent to AWD and balanced weight distribution provided by the symmetrically-laid-out drivetrain with a longitudinally-mounted BOXER engine positioned in line with it. Thanks to this synergy, the vehicle is able to deliver superior performance such as stability at high speeds and brisk cornering.

According to Subaru, the symmetrical AWD system is one of the key technologies that underscore the automaker’s commitment to driving pleasure and safety. Under the automaker’s “Confidence in Motion” brand statement, it will continue to improve its engineering excellence and unique appeal to provide an “Enjoyment and Peace of Mind” driving experience to customers around the world.