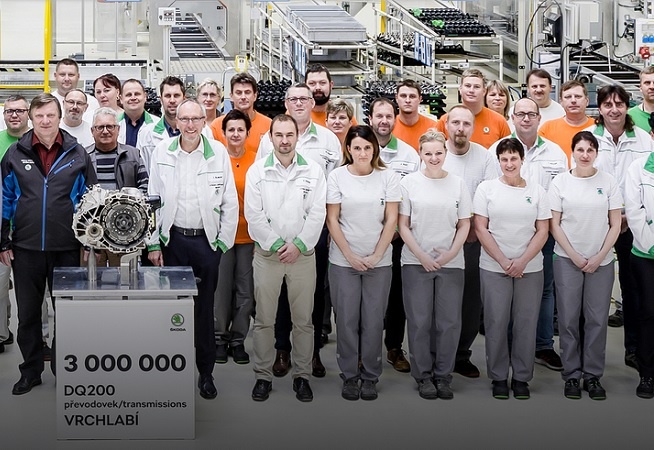 Skoda Auto has announced that it has crossed production of three million DQ200 automatic gearboxes at its factory in Vrchlabi, which is located in the Czech Republic. The plant produces 2,200 dual-clutch automatic direct-shift transmissions on a daily basis and is equipped with one of the most modern production lines seen in a Volkswagen planttic direct-shift transmissions every day.

Commenting on this achievement, Michael Oeljeklaus, Skoda Auto Board Member for Production and Logistics, said, “Today we have exceeded the mark of three million DQ200 transmissions produced.”
He went on to add that the by achieving this production milestone seven years after these gearboxes were launched in the market shows that the company’s gearboxes are still state of the art and cater to the needs of brands across the entire group. He said that the achievement also reflected the Vrchlabi-based team’s high level of technological proficiency in an impressive manner.

The DQ200 automatic direct-shift gearbox (DSG) is used in several Skoda models as well as in other vehicles produced by the Volkswagen Group. About 38 per cent of the units produced at the Vrchlabi factory is used by Skoda while 62 per cent are used in vehicles made by other Volkswagen Group brands. Skoda Auto exports over half of the gearboxes to Germany, while the rest are sold to customers in other countries like India, Poland, Russia, Spain, South Africa and Hungary.