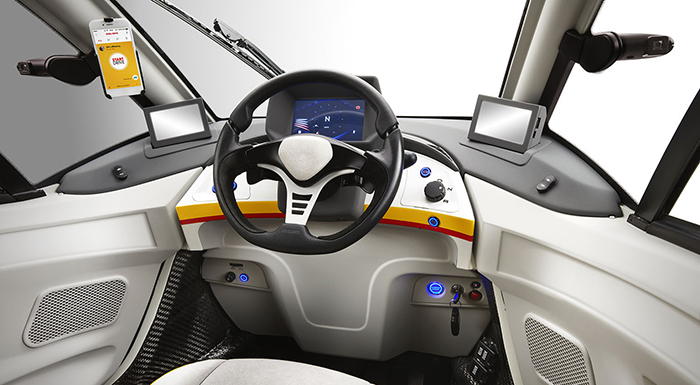 Shell has made a buzz with the recent debut of its concept city car, which, if will go into production, could effectively deliver material reductions in energy usage in the road transport sector. A three-seater, the car is a real proof of energy efficiency enhancements that can be attained by using innovative technology available today through a process of “co-engineering” whereby engine design, vehicle body and lubricants are all created together.

Independent testing and an arduous life-cycle study reveals that Shell’s Concept Car would deliver a 34 percent reduction in key energy use over its entire lifecycle when compared to a usual city car available in the United Kingdom. The revolutionary Shell Concept Car is designed to use nearly 50 percent the energy needed to build and run than a usual small family car and 69 percent than that of a usual SUV.

Shell’s concept car is a total rethink of the Gordon Murray Design T.25 city car built in 2010 for which Shell built a prototype oil to enhance the vehicle’s energy efficiency. The breakthrough car is the result of a co-engineering partnership between global engine, vehicle and lubricant designers, with each of the three elements of the vehicle specially tailored to work optimally with each other. It takes a full view on energy reduction concentrating on design material selection; decreased energy demand through aggressive downsizing, and streamlining while improving the energy delivery efficiency through groundbreaking engine design and lubricant formulation to reduce the impact in terms of overall energy lifecycle use.

The gasoline consumption of the car has been gauged utilizing an array of vehicle testing protocols covering both urban and steady state driving styles. Sample test results consist of a steady state consumption of 107 miles per gallon that was attained [2.64Litres per 100km] [38km/Litres] [89.1 miles per gallon US] at 50kph/31mph and an enhancement of 4.67g CO2/km on the New European Driving Cycle (NEDC) from the use of bespoke lubricants, equal to a five percent enhancement in fuel efficiency compared to standard lubricants available in the UK.

In a statement, Mark Gainsborough, Executive Vice-President of Shell’s global lubricants businesses which supported the project, noted that this is a huge automobile engineering milestone and he is extremely proud of what Shell’s scientists and their partners at Geo Technology and Gordon Murray Design have accomplished. He added that insights gained from the project could be transformational in terms of how they address energy use in the road transport sector.

“Energy use and climate change are major issues for society. This project shows that if we use the best of today’s technology, including cutting edge lubricants science, we could potentially have a major impact on energy use and reduce CO2 emissions. The improvement in economy derived from the collaborative design of engine and lubricant is impressive and highlights the enormous benefits achieved from close relationships between design partners.”

Gainsborough concluded that it showcases the powerful role that lubricants could potentially play in helping attain CO2 reduction goals.

To gauge CO2 emissions and fuel economy, the Shell Concept Car was independently tested at a UK certified automotive testing facility alongside an array of other cars under comparable conditions. In the formal NEDC test, the car generated lower CO2 emissions than both a typical hybrid car (32 percent) and a petrol-powered city car (28 percent).

Shell supplied all the fluids for the concept car, specially ‘designing’ the motor oil to complement and improve the vehicle’s overall efficiency, mainly by reducing friction. The company’s technology team developed bespoke engine oil, based on its premium product Shell Helix Ultra with PurePLus Technology. Similarly, engine guru Osamu Goto’s group at Geo Technology enhanced the three cylinder petrol engine by re-designing and enhancing a number of the internal engine components associated with friction. On the NEDC’s cold portion, these fluids decreased CO2 emissions by 7.1 percent and on the combined cycle by 5.0 percent, compared to standard lubricants available in the UK, once again underlining the value of co-designing fluids and engine.

According to Dr. Andrew Hepher, Vice President, of Shell’s lubricant research team, their car may be small, but it is packed with potential. He said that they want to speed up the conversation about how they make road vehicles more energy efficient and less carbon-intensive. “In the coming weeks and months, we look forward to sharing our research insights from this project with engine designers, car manufacturers, academics and other experts across the automotive sector.”