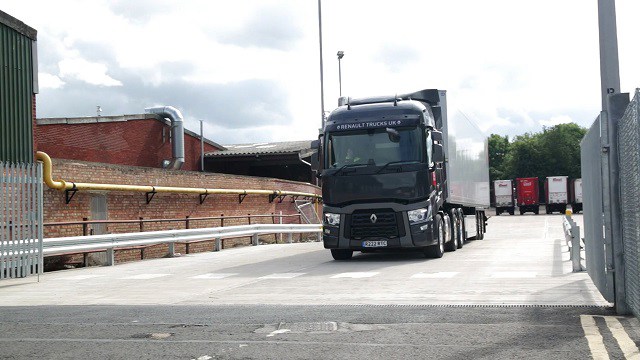 The safety back-up device was developed through close collaboration between a major fleet operator and Renault Trucks’ engineering team in Lyon, and is essentially available as a software and wiring update on all Range T, C and K Renault trucks with electronic park brakes. In the event that the door on the driver’s side is opened at speeds of up to 3 kph (1.8 mph), the device automatically activates the park brake.

Speaking about the Anti-RAPB device, Nigel Butler, Commercial Director, Renault Trucks said that it serves us a great example of how the company is using technology to help prevent avoidable accidents. Though many technological advances continue to be made, vehicle runaway situations continue to be common. Drivers are liable to get distracted when the truck is idling and might forget to activate the park brake when they leave the vehicle to unhitch the trailer or to sign a document. Even if there is only a slight incline, if a 44-ton vehicle starts rolling, it is a serious issue. Renault’s Anti-RAPB solution acts as a preventive measure that reduces the possibility before it even arises.

Renault Trucks’ solution for this problem was to develop a ‘fail-safe’ device which can operate in two scenarios at a speed below 3kph. In each instance, the electronic park brake of the Range T, C and K trucks utilizes the extensive functionality of the vehicle’s electronics systems to facilitate the Anti-RAPB innovation and to communicate the system’s status to the driver through the dashboard ‘tell-tale’ messages.

One possible scenario is that when the truck is in neutral, the park brake is not used and the driver’s door is opened. In such a case, the ‘door open’ buzzer will sound for a moment, followed by the application of the park brake and the message ‘Park Brake Applied’. If this is done, when the door is closed and drive is selected, the park brake will auto release when pulling away.

The second scenario is that the park brake is not applied when the vehicle is in gear. When the driver’s door is opened, the door open buzzer will activate, followed by the application of the park brake, with the message ‘Door open. Select Neutral position before leaving vehicle’.

In case this message is ignored, the park brake will not auto release when the door is closed. So, the driver will have to either manually release the park brake or select neutral and return to drive.

Nigel Butler reiterated that safety is of utmost importance to Renault Trucks. He added that the brand is committed to developing technology that provides safer environments for drivers, their colleagues working on sites or in yards as well as for other road users. The Anti-RAPB device will provide a critical safety intervention in the event of an emergency, while the added interlock of speed ensures that no action will be taken if doors open above 3 kph. Reducing the risk of runaways will also serve to minimize downtime and reduce repair and insurance costs that are caused by such incidents.