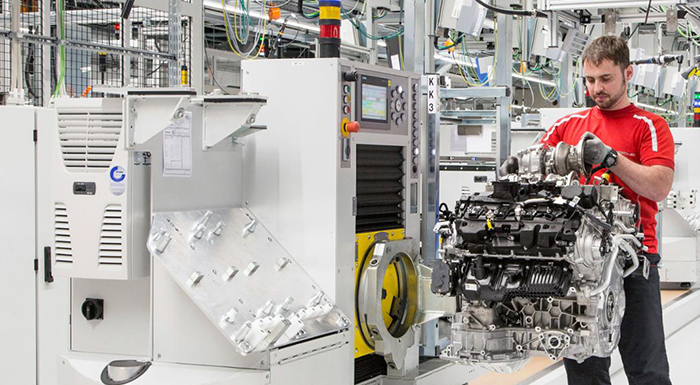 Porsche is further cementing its position in the industry with the recent opening of its new eight-cylinder engine production facility at the main site in Stuttgart- Zuffenhausen.

Around €80m has been invested in the facility, which was constructed starting in early 2014 and is capable of producing 200 engines per day. With an area of 10,000 metres2, it is subpided into two levels with ground floor dedicated to the logistics and the upper floor designed for engine assembly.

The state-of-the-art plant has been designed in terms of sustainability. The premier automaker reveals that it is the first-ever industrial quarters in Germany to get gold rating in its pre-certificate from the German Society for Sustainable Construction (DGNB). Moreover, the facility has solar panels that generate 242,500 kWh of electricity per annum and reduce around 105 metric tons of carbon dioxide emissions.

According to Porsche executive board chairman Oliver Blume, Porsche stands for sport high-performance engines: from engine design to series production. He said that they are further extending their competence in this area with the new engines, and this is how they would assure their customers the driving pleasure of tomorrow and protect the future jobs of their employees. “At the same time, we are creating the necessary foundation for successfully leading Porsche into the new age of electric mobility.”

At the new facility, Porsche intends to produce eight-cylinder V-engines, which will be utilized in the new Panamera and as the automaker mentions, needs extremely precision processing.

A number of tools have been installed at the facility whose torque and speeds are electronically controlled. These adjustments can be changed at any time and can also be used at any work station.

Aside from this, Porsche also collects around 2,300 units of data from the engine after the completion and testing of the assembly. Any fluctuations in quality are spotted very early at the onset and are inhibited easily.