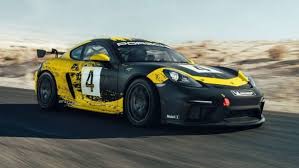 Porsche 718 Uses Hemp as a Component to Save Weight

Automotive manufacturers are testing out the effectiveness of different materials when it comes to reducing weight and increasing fuel efficiency. In the case of the Porsche 718 Cayman GT4 Clubsport, the racing version of the 718 Cayman sports car, Porsche made parts of the body from an “organic fiber mix” comprising agricultural byproducts like hemp and flax.
The material has been used in the doors and rear wing spoiler of the Clubsport. IAccording to Porsche, the fiber is similar in weight and stiffness to carbon fiber, but is more eco-friendly.
The Clubsport cannot be used on the roads but it does give an idea of what the new Cayman GT4 road car will be like. The previous Cayman GT4 was a limited-edition model that offered racing fans an outstanding driving experience.

All current 718 Cayman models come with turbocharged four-cylinder engines, but the Clubsport continues to have a 3.8-liter naturally aspirated boxer-six engine derived from the model’s previous generation. The mid-mounted engine has an output of 425 horsepower and 313 pound-feet of torque. A six-speed dual-clutch transmission sends power to the rear wheels. The suspension of the car has also been upgraded and so has the brakes, as well as mandatory safety equipment like a roll cage, six-point harnesses, and rescue hatch in the roof.

Porsche plans to sell two versions of the Clubsport. The Trackday model is meant for amateur drivers who would like to have fun, while the Competition model is meant for actual racing. The main upgrades for the Competition variant include adjustable shock absorbers, adjustable brake balance, an air jacking system, and a quick-release steering wheel.

Both versions of the 718 Cayman GT4 Clubsport are currently available to order. The Trackday starts at USD 152,895, while the Competition starts at USD 179,140. Cars like these are important for Porsche which has tried to maintain a close link between its models and their racegoing variants.