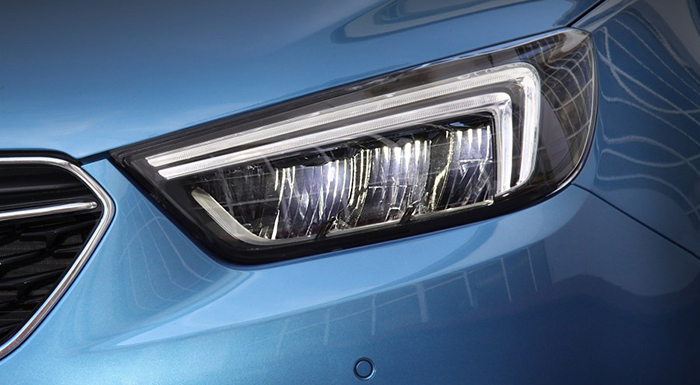 Opel drivers have something new to be excited about. The German automaker is now adding adaptive forward lighting (AFL) and full LED headlamps as an option to vans and SUVs in the compact market segment.

The optional AFL LED headlamps provided by the new Opel Zafira and Opel Mokka X emit a bright white light that automatically adapts to the driving situation. Opel says that AFL LED comes with nine inpidual functions or lighting patterns such as Country Light, Town Light and Stop Mode Light, which not only enhance visibility but also save energy.

According to William F. Bertagni, Vice President of Vehicle Engineering Europe at Opel, the widespread availability of intelligent LED technology is the best way to greatly reduce the risks of nighttime driving. He notes that the new Opel Zafira and the Opel Mokka X with their optional AFL LED headlamps are crucial steps towards realizing this potential.

In lieu of switching LEDs on or off in different combinations, AFL LED adapts to the driving situation and the presence of other road users by automatically changing the headlamps’ lighting pattern.

The optional AFL LED headlamps come with nine functions. At speeds above 55 km/h, Country Light enhances illumination of the road and the verges when driving in rural areas. The illumination range in the driving lane is longer, while the light distribution on the offshore is lower to prevent dazzling of oncoming traffic. Moreover, the enhanced illumination of the roadside verges helps recognize potentially harmful objects earlier.

When cornering or in curves, AFL LED activates Cornering/Curve Light, which switches on an extra left or right LED that illuminates the road in the travel direction, depending on the turn signal or steering angle. Cornering/Curve Light gets switched on automatically at speeds under 40 km/h when the turn signals are in use and/or the steering angle changes from the straight-ahead position and crosses a specific threshold. This function switches off when signaling stops and steering is in the straight-ahead position and is active up to a maximum speed of 70 km/h.

When the car is at speeds under 55 km/h, AFL LED automatically activates Town Light. Unlike Country Light, its beam is closer to an area near the car and wider at the sides thanks to the cornering lights that operate at reduced intensity. The enhanced illumination enables the driver to see the sides of the road and prevent potential accidents.

Maneuvering Light illuminates the area around the car when driving or reversing into a parking space, or leaving the parking spot.

When in this mode, the car’s cornering lights shine at reduced intensity when the driver chooses reverse gear. Maneuvering Light stays active for 20 seconds after disengaging reverse gear or until the car drives faster than 7.0 km/h in a forward gear.