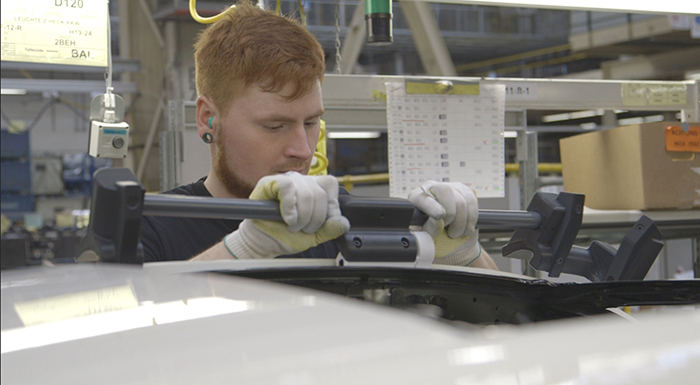 The use of 3D printing is a growing trend among global automotive manufacturers today. Opel is one of those automakers to jump on board, successfully cutting production tool costs by up to 90 percent in less than 24 hours using its Stratasys 3D Printers and 3D printing assembly tools.

Last year, the German automaker was the third largest passenger car brand in the European Union, which together with Vauxhall, sold over a million cars. Given that efficient production was critical to Opel’s success, its International Technical Development Center is 3D printing an array of production and assembly tools to take the production of its iconic ‘Adam’ hatchback car to new heights. These assembly tools are utilized to accurately attach various components to the car such as the rocker molding and roof spoilers, to align the ‘Adam’ lettering on the rear-side window and to assemble the glass and retractable roofs.

According to Sascha Holl, Virtual Simulation Engineer – Tool Design at Opel, apart from the cut in tool production time and significant cost reductions, customized tools are a third essential benefit attained with 3D printing. “We are now able to produce more complex shapes than we could via conventional manufacturing. This crucially allows us to adapt the tool to the worker and the specific car.”

Since the company 3D printed its production tools, it involved its assembly-line workers in the design process to boost efficiency. This enables operators to assess concepts, using their experience to emphasize any possible issues before committing to the production of the final assembly tool for every car component. With Stratasys 3D printing, any needed design iterations to the Opel production tools are easily accommodated in just a matter of hours, thus eliminating expensive iterations further along the manufacturing process.

Andy Middleton, President, Stratasys, EMEA, said in a statement that causes such as Opel stress the huge impact that low risk, high-reward 3D printed parts—such as production tools—could have on production efficiency. He added that the capability to manufacture such items on-demand at a reduced cost could considerably speed up time-to-production and provide businesses that competitive edge. “Combine that with the ability to customize tools efficiently, as well as create complex geometries, and you can see why Opel is indicative of the way in which additive manufacturing is transforming our customer’s production operations.”