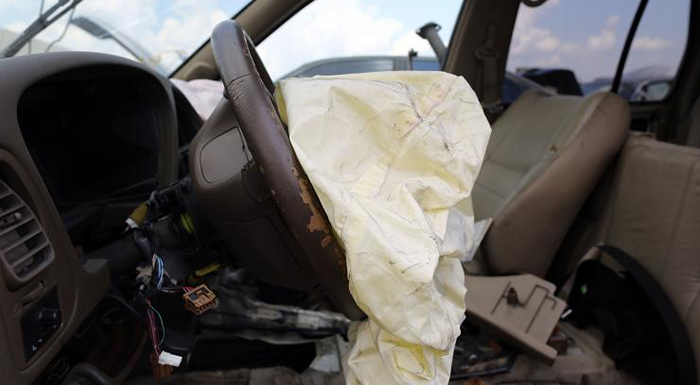 After being initially cleared of airbag defects, Nissan has recently announced its re-inspection of vehicles in Japan after a passenger was injured when she deployed her Takata airbag during a crash last week.

The Japanese automaker confirmed that the vehicle involved in the mishap, a 2006 X-Trail SUV, had been included on a recall list earlier this year due to fears of its passenger side airbag, but was found not to have moisture leaks when the vehicle was brought in for inspection.

Since 2008, more than 30 million cars have been recalled around the world over Takata airbag inflators that have exploded with too much force, spraying shrapnel inside the car. So far, eight casualties and more than 100 injuries have resulted from defective inflators.

According to Nissan, the vehicle in question had been among 320,000 whose owners had been offered a recall in May. Of those, 113,000 vehicles were brought in for inspections and 102,000 were considered fit for purpose and returned to owners.

After the crash, the passenger was rushed to the hospital where she was treated for injuries to her head and wrist caused by small, sharp metal objects which Nissan claimed to be part of the airbag’s container.

In a statement, Tsutomu Miyashita, Nissan’s general manager field quality assurance, said that they would contact the owners of those cleared vehicles to request that they bring in their vehicles for a second inspection.

A Takata spokeswoman reported that they have been informed by Nissan about the incident, and they are in the process of confirming whether one of their airbags was the cause of the injury.

Nissan has been conducting thorough testing of inpidual vehicles for air leakage, which can lead to a build-up of moisture around the airbag’s seal and cause them to explode. Vehicles found to have these leaks will be issued an order for replacement.