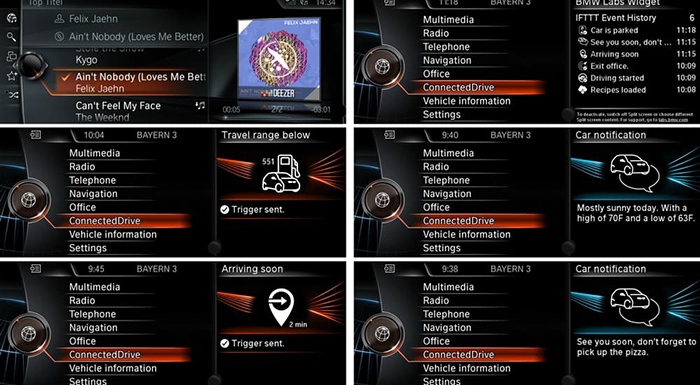 Among the connectivity features of BMW’s ConnectedDrive infotainment system are the ability for motorists to listen to music, make calls, and get live traffic information. Thanks to a new update, there are now more music options, as well as other features including the ability to control heating at home.

Deezer has recently joined the existing Napster as a means by which to stream music. Accessed through BMW Online Entertainment, it enables motorists to listen to music and spoken content, utilizing their vehicle’s on-board SIM so as not to need an accompanying smartphone or to eat into a phone’s data allowance.

The beauty of the service is that it can be accessed on up to three other mobile devices, enabling users to create playlists at home, ready for listening to the next time they are in the car. They can either log on with an existing Deezer account or sign up to Online entertainment through BMW ConnectedDrive.

Another huge part of the update is the addition of BMW Labs, a service that enables users “to test developing and near-final products before full release. According to the automaker, Labs was formed due to the speed with which new services were being developed.

The Labs portal was inaugurated in January to enable ConnectedDrive services to connect the automation service IF This Then That (IFTTT). Apart from being able to control online services, it enables users to do things such as turning on lights, opening the garage door, and controlling the central heating from their car, assuming they have the right smart home hardware.

Somewhere else, BMW Apps Interface, which enables users to utilize supported BMW and third-party apps from compatible iOS and Android devices, has been made standard across the BMW range, as has the BMW Online Service. The latter offers an internet connection through which users can keep up-to-date with weather and news, download apps to the car and browse the internet. Now, it also has a text-to-speech function that can read news stories aloud and detail points of interest found through online search. What’s more, emails can be read, dictated and sent using the BMW Online Office service.

The new update has also improved the functionality of the free BMW Remote App for iOS and Android. The app enables users to operate features of their vehicle remotely. A vehicle finder function tracks the user’s car utilizing GPS, the interior temperature can be preset for when the driver gets into their car, and the car’s lights can be flashed to help locate it in a car-park. Additionally, the app enables users to send a location to the vehicle for in-car navigation later.

The new BMW ConnectedDrive updates are available with immediate effect.