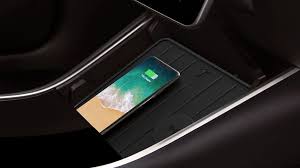 The Tesla Model 3 is a model that is very much in demand. It did however lack one feature that tech savvy consumers would have liked to have – Qi wireless charging. Qi wireless charging is a feature that makes it possible to place smartphones on a specially designed pad for charging and eliminates worries about plugging in any cables. Manufacturers like Honda, Ford, Volvo, and Mercedes have offered integrated Qi charging pads in their latest models.

Tesla, true to its positioning as a company that is a true innovator is fast catching up by offering the Tesla Wireless Pad that has been designed by a team of designers and engineers. The Tesla Wireless Pad is available as an aftermarket solution for Model 3 owners who need a wireless charger. The pad has the capability to charge two Qi-enabled phones simultaneously and is made with a polyurethane coating for maximum grip. Though the current product is made for the Model 3, the team is also working on variants that can be used in the Model S and X.

The product was designed in response to demand from many Tesla customers who tried out other options to fit their Tesla cars. The Tesla team spent many months working on prototypes and designs before coming up with their final version. The Tesla Wireless Pad is designed to smoothly fit in with the current design of the Tesla Model 3, and can be retrofitted easily.

Users just need to remove the Model 3’s standard console pad, replace it with the new one, and plug the charging cable into USB. The wireless pad can then be used to charge any enabled phone with a 10-Watt power output, and this is comparable to most standard chargers.
The Tesla Wireless Pad will be available from the month of April for USD 99.