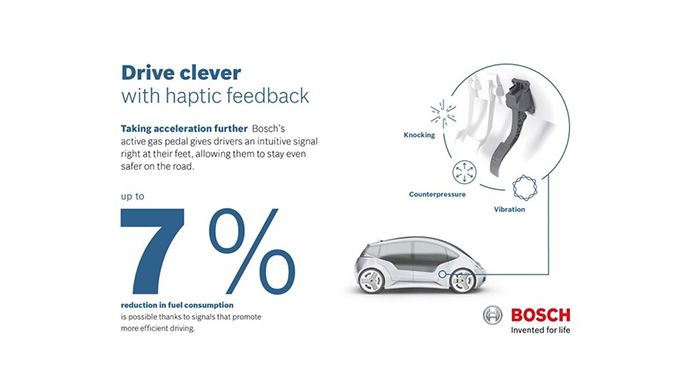 People nowadays have already become accustomed to gadgets that give haptic feedback, typically as a reactive force or vibration. From smartphones, the technology has now found its way in cars in the form of seats or steering wheels that vibrate to alert the driver when he is wandering out of his lane. OE suppliers such as Continental and Bosch have been working on an extension of this idea, which led to the latter’s development of haptic throttle pedals that vibrate or give forced feedback to warn of any activity that is not favorable to good fuel economy. Now, the German supplier has attached a fuel-savings number to the technology.

In a quest to boost fuel economy on a measurable scale, Bosch proposes the combination of haptic feedback technology with electronic controls already in place in a number of fuel-conscious vehicles such as the Mitsubishi i-MiEV and Toyota Prius.

Most fuel economy-conscious vehicles already come with controls that restrict the amount of throttle response when in certain driving modes. Usually, these take some of the lead out of “lead foot” drivers without intervening with abrupt throttle presses that may show emergency maneuvers.

Start-stop coasting is where fuel-saving potential comes from. This is where the engine is shut off while the vehicle is still moving, maintaining speed by “coasting” and automatically engaging the engine and drivetrain when required. Bosch projects that in this scenario, haptic feedback could be used in warning the driver to enter “coasting mode” in order to save fuel. In plug-ins and hybrids, the haptic pedal could be used in showing the driver when the combustion engine is about to engage, providing them the opportunity to lighten pressure on the pedal to maintain electric-only mode.

Bosch projects that if some or all these were implemented on any vehicle, drivers could see a slash in their fuel consumption by up to 7 percent.

Moreover, the German supplier believes that haptic feedback through the gas pedal could be used to show the best time to shift gear in a manual transmission. This would be a more intuitive, less distracting indicator to the driver than a dashboard display. Also, it could be used to show over-speed on marked roadways and even help in emergency situations if the car is traveling too fast to make an upcoming curve safely. The latter idea could be incorporated with GPS navigation and even information from the Internet to enhance the alerts provided.